Home » MLB » A golden glove and an underrated bat: Here’s what makes Scott Rolen a Hall of Famer 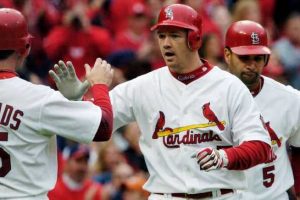 Congrats to Scott Rolen, who will join Fred McGriff on induction day in Cooperstown, New York, this July as the newest members of the Baseball Hall of Fame. Rolen made electoral history with his selection: He now has the lowest first-year vote percentage — just 10.2% — of any player to eventually get to the 75% required from the writers since modern voting procedures began in 1966.

Rolen’s meteoric rise over six ballots has some fans wondering … well, to put it politely, what the heck is going on here. Scott Rolen?!? For them, he doesn’t pass the “eye test” for Hall of Fame status — a test that usually seems to top out with the likes of Willie Mays, Henry Aaron, Johnny Bench and Ken Griffey Jr., as if the Hall of Fame should only elect the most indisputable of candidates.

With that mind, let us dig into Rolen’s career a little bit. Here are six reasons he is headed to Cooperstown.

We’ll start with his career WAR. Yes, it’s not the Hall of WAR, but it’s a reasonable starting point that helps explain why the baseball writers got around to supporting Rolen. The Hall of Fame has always been about electing the best players — some combination of career value and peak excellence. WAR is a guide to career value and helps us assess a player more effectively than relying on the eye test or a gut feeling. No, it’s not the complete answer, but it’s an important part of the equation and gives us context beyond numbers like hits or home runs that ignore position or defense.

Rolen’s career WAR of 70.1 fits right in with recent Hall of Fame selections, well above even the lowest bar of players elected. I looked at all Baseball Writers’ Association of America selections since 2000 — ignoring relief pitchers (who have lower WAR totals) and veterans committee selections (since committees take the leftovers the writers fail to elect). Including Rolen, that gives us a list of 39 Hall of Famers.

Their average WAR is 73.4. Rolen comes right smack in the middle: 19 players have more career WAR, and 19 have less. He is squeezed in between Gary Carter and Tim Raines.

2. He is the ninth-best third baseman of all time.

Of the eight players ahead of Rolen in WAR at the position, seven are in the Hall of Fame and the eighth is Adrian Beltre, who hits the ballot next year. There are several Hall of Famers below him, including Home Run Baker, Jimmy Collins, Pie Traynor and George Kell — a reminder that you don’t have to be Mike Schmidt or George Brett to make it.

Rolen’s value is kind of the dividing line between the Hall of Famers and other more modern third basemen who didn’t get in, including Ken Boyer, Darrell Evans and Graig Nettles (all excellent two-way players).

Here’s another way to look at it. MLB Network ran a list of the ninth-best players at each position:

That’s pretty good company if you ask me. All are Hall of Famers except for Mauer, who is not yet eligible (and joins Beltre on the ballot next year). No, these are not necessarily players viewed as inner-circle Hall of Famers, with the exception of Gwynn, but it’s a strong list of well-qualified Hall of Famers.

3. Yes, his defense was that good.

Rolen’s WAR is boosted by strong defensive metrics; but if you want to believe in the eye test, then his defense also passes with Secretariat-like flourish. He won eight Gold Gloves, which speaks to how his D was viewed while active. Going back into the contemporaneous accounts, some commentary:

The anecdotal evidence backs up the statistical measurements. Rolen was the Nolan Arenado of his generation.

4. His hitting was better than you realize.

We’ll start with some old-school stats. It’s fair to say that Rolen’s counting stats don’t scream super loud, in large part because he did miss significant time with injuries in his 30s. Still, among third basemen (who played at least 50% of their games at the position), he is:

It all adds up to a borderline top-10 offensive third basemen and one of the greatest defensive third basemen of all time. (Baseball-Reference’s fielding metrics credit only Brooks Robinson and Adrian Beltre with more fielding runs at third base.) That’s why Rolen is top 10 at the position, and in my book, if you’re top 10, you’re a Hall of Famer.

Part of the key here: Third base is the ultimate hybrid position: some offense and some defense. It is a reason that it’s the most underrepresented position in Cooperstown. It is a difficult position to evaluate.

5. He was underrated in his own time.

One of the anti-Rolen arguments is that his only top-10 MVP finish came in 2004, when he finished fourth. But that’s kind of the point to everything here: We’re smarter than we used to be, better at understanding why teams win and lose baseball games than we were in 1997, when Rolen was named National League Rookie of the Year. Rolen’s initial years were spent on bad Phillies teams; his first four Philadelphia teams averaged 91 losses, which didn’t help him get a lot of recognition early on. Defense has always been an underappreciated art, and every gifted defensive third basemen since Brooks Robinson has played in his shadow and rarely gets enough credit. (Although Nolan Arenado is finally breaking that trend, in part because it’s been nearly 50 years since Robinson played, so that shadow is finally waning.)

From 1997 to 2004, his eight-year peak, Rolen was third in WAR, behind Barry Bonds and Alex Rodriguez. In raw batting totals, he was eighth in doubles, 14th in RBIs, 17th in runs and 23rd in home runs. I’m not advocating that he should have won multiple MVP awards, and he wasn’t a top-10 hitter in the game (except 2004), but he was a very good, productive hitter who was one of the game’s best all-around players for eight seasons and still a solid player after that. We just didn’t know how good at the time.

“I loved playing with him,” his former Reds teammate said in a video posted on social media. “I learned so much. If any player is lucky enough to have a role model and a teammate like him, they’re as lucky as it gets. I shaped my career, my effort, my work in his mold. He’s a Hall of Famer today. Deserving. And I have nothing but respect for him and his achievements.”

Is Rolen a slam dunk Hall of Famer? Of course not. But one question that is worth asking about every Hall candidate: Does a player raise or lower the current Hall of Fame standards? Rolen raises the standards.