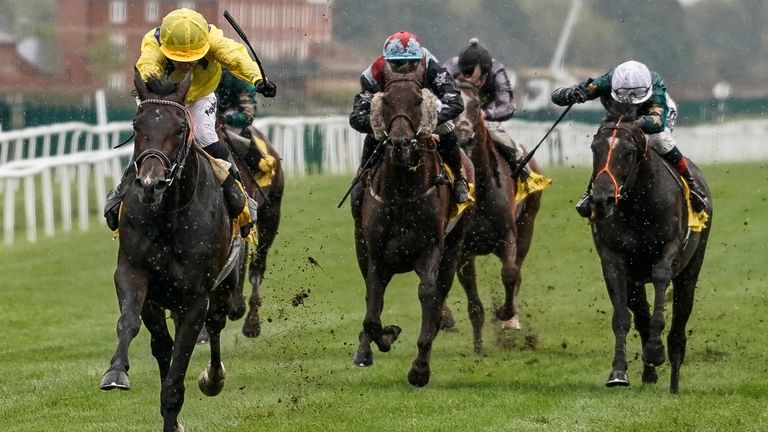 Registered as the St Simon Stakes, the Group Three has attracted a field of 11, which includes the Ebor runner-up Weekender.

Best Solution won the race 12 months ago and has gone on to enjoy a terrific season this year, winning two Group Ones in Germany and the Caulfield Cup in Australia.

Young Rascal was well fancied for the Derby having won the Chester Vase in style and while it did not go to plan at Epsom, it remains his only defeat in four outings this season.

“He should give a good account of himself. He has got a penalty but he should run well,” said Haggas.

“I wanted to go for the Prix Chaudenay on Arc weekend, but the ground was too fast. He needs cut in the ground.

“He wasn’t right after Epsom for a long time, so we have nursed him back and we don’t want to put him on the back foot again.

“If I’m allowed to run him, I think next season he is absolutely tailor-made for the Yorkshire Cup.”

Mark Johnston’s prolific winner Communique is the only other three-year-old in the race with Andrew Balding’s Morando another major player.

John Gosden is taking him on with Azano, who stepped up markedly on his first run to win by five lengths next time out.

Gosden said: “He has done well and won very nicely at Yarmouth. He worked nicely on Wednesday morning.

“He wouldn’t want rain and for it to become too testing, but he is a grand horse. He very much pleased us last time and has done nothing but the same since.

“A little bit of cut is fine, but we don’t want too much if you look at who is by (Oasis Dream).”

Haggas runs Fanaar, who will be having his sixth start.

“He worked very nicely on Wednesday. He looks great and is moving great,” said Haggas.

“He was very unfortunate in a nursery at Doncaster which has worked out very well as Arctic Sound won a Group Three afterwards.

“He has been raised 11lb for that so they have rather forced my hand a bit, but I’d like to give him a try in a Group race as he is a useful horse.”

Almufti represents Hugo Palmer having won well at Kempton on his most recent outing.

Palmer said: “He has come on really well from Kempton and is a horse I am looking forward to.

“He had shown us a lot at the beginning of the year, but I think he was just too weak to carry it through to the racetrack.

“He has improved and strengthened all year and his last bit of work was fantastic.”