Home » Horse Racing » Up And Coming Stakes: Tiger Of Malay shows his class with tough win under big weight

Up And Coming Stakes: Tiger Of Malay shows his class with tough win under big weight 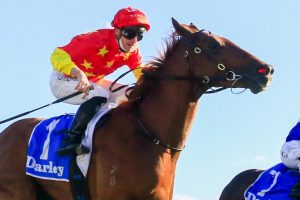 Tiger Of Malay proved there is no substitute for class when he scrambled to narrow comeback win at Kembla Grange on Saturday.

For trainer Michael Freedman the winning margin didn’t matter as relief was his overwhelming emotion after his crack colt got up to win the Group 3 $160,000 Up And Coming Stakes (1300m).

Relief that he chose the right race and relief that Tiger Of Malay has been able to transfer his brilliant juvenile form to his three-year-old season.

“You see it year in year out that a lot of top two-year-olds don’t come back at three for various reasons,’’ Freedman said.

“To see ‘Tiger’ chalk up a Group 3 at his first run back as a three-year-old with that big weight showed his quality and consolidates him as a stallion prospect for Henry Field and the Newgate crew.’’

A terrific return win from Tiger Of Malay under 61kg in the G3 Up And Coming Stakes for @Freedman_bros and jockey @mcacajamez! 💪 pic.twitter.com/sPUOSmAyJy

Freedman, who trains in partnership with his brother Richard, admitted he changed his mind repeatedly about whether to run Tiger Of Malay first-up under 61kg.

Finally, he decided to roll the dice and go to the Kembla Grange race – and Tiger Of Malay, under champion jockey James McDonald, did the rest.

“The conundrum was trying to work out the right race to run him,’’ Freedman explained.

“If we waited for the San Domenico Stakes, it looks like being a hot enough race over 1100m and they probably would run him off his legs a bit.

“So, when we weighed everything up we decided lets run him today, we knew he had to carry a big weight but it gets him on the right leg for the rest of his spring campaign.’’

SCROLL DOWN FOR THE TAB BETTING REPORT

“It was always my concern carrying the 61kg,’’ Freedman said.

“I think probably the most meritorious part of his win was having to pick up with that big weight.

“We discussed trying to get a run where he could keep his momentum up rather than having to stop-start and then sprint with that weight.

“As it turned out that is what he had to do when he took that inside run so it was a really good comeback win.’’

McDonald took the shortest way home on Tiger Of Malay, hugging the “paint” throughout but he conceded barrier one almost brought about his colt’s undoing.

Tiger Of Malay was held up behind the leaders into the straight then had to accelerate under his big weight when the run came on the fence.

James McDonald goes for home on Tiger of Malay after getting the inside run. Picture: Getty ImagesSource:Getty Images

At this point of the race, Coastwatch, carrying only 53kg, was wider out on the track and full of momentum as he reached the front before Tiger Of Malay rallied underneath him to wrest the advantage on the line.

“I don’t like that barrier one sometimes. It can work in our favour and it can work against us,” McDonald said.

“The first half of the race went beautifully.

Tiger Of Malay jumped out and mustered speed really well and then the field sorted itself out with genuine speed throughout.

“Then it got a little bit sticky in there, I was held up for a few strides but I was on the right horse to be able to get that little bit of clear air and he dashed late under the big weight.

“He’s a very talented colt, he’s got good determination. He obviously had a good grounding in Brisbane and he’s furnished into a lovely animal now and I’m sure wherever Michael places him he’ll be very competitive.’’

This is the next problem for the Freedman brothers – where to next for Tiger Of Malay?

Their brilliant colt is being aimed at the Group 1 $1m Golden Rose (1400m) at Rosehill on September 25 and he will need at least one more race before the three-year-old classic.

“We will see how he pulls up as he has had to lump 61kg on a Good 3 track so I dare say he may feel it a little bit the next day or two,’’ Freedman said

“He will have a pretty easy week, if the weather stays nice we might take him to the beach and just weigh it up.

“Whether we come back to the set weights and penalties for the Run To The Rose is probably a bit problematic but if we went to the Ming Dynasty he has to lump 61kg again.

“So, we will let the dust settle, give him a steady week and evaluate our best option.’’

Freedman did confirm the stable’s Golden Slipper winner Stay Inside is likely to barrier trial at Kensington on Friday before his return to racing in the Group 3 San Domenico Stakes (1100m) at Rosehill Gardens on August 28.

Big Parade landed some nice bets when impressively taking out the Ranvet Handicap (1200m). The Mark Newnham-trained galloper was $3.50 when markets opened on Wednesday and $3 was still available this morning. Bottoming out at $2.80, the gelding would jump $3.20 and the third best supported runner in the race.

All Time Legend was a big drifter all week. Installed the $2 favourite earlier in the week, he went $2.70-$3.90 on the day but still went around nearly twice as popular as anything else.

Ziegfeld was very costly after going around with the bulk of the money in the Drinkwise Premier’s Cup Prelude (2000m). The Godolphin runner was a hot $2.15 favourite and held more than four times what any other horse did.

King Of Sparta was easily the best tried runner heading into the Precise Fire Handicap (1200m). Jumping $3.90 favourite, the Peter & Paul Snowden-trained runner held 27 per cent of the total investment and was a losing result for TAB.

The most popular runner in The Agency Spring Preview (1400m) was Frosty Rocks. The first horse backed when markets opened on Wednesday, Frosty Rocks had been installed as a $4.80 chance at that stage but was crunched into as low as $3.20. Getting back out to $3.80 today, Frosty Rocks still held more money than anything else although it was fairly competitive in the popularity stakes.

Tiger Of Malay proved a horror result for TAB after it got the photo in the Darley Up And Coming Stakes (1300m). Punters were all over the Richard & Michael Freedman-trained galloper despite it going $2.70-$3.20 on the day. Such was the weight of money on Tiger Of Malay that it was the only one to hold six figures with TAB and was responsible for a tick under half the total investment on the race.