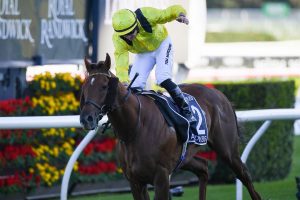 Addeybb, the English champ who has won successive Queen Elizabeth Stakes at Randwick, is entered for the Group 1 Prince Of Wales’s Stakes at Royal Ascot on Wednesday night.

But William Haggas said the star middle distance galloper was not a certain starter as the trainer is concerned about the likelihood of a firm surface for day two of the Royal Ascot carnival.

If Addeybb does line up in the Prince of Wales’s Stakes, it could be the highlight race at Royal Ascot this week with last year’s winner Lord North, dual classic-winner Love, Breeders Cup Filly and Mare Turf winner Audarya and Cox Plate runner-up Armory also among the entries.

Haggas said if Addeybb is withdrawn from the Prince Of Wales’s Stakes, he is likely to resume in the Eclipse Stakes next month.

Originally published asRoyal Ascot kicks off but query on Addeybb