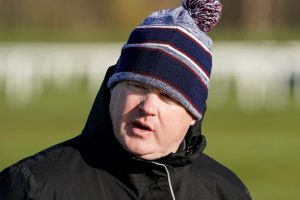 Gordon Elliott was last night urged to “step away” from racing in the wake of the dead horse photo storm.

The advice came from top owner Max McNeill, whose Escaria Ten, trained by Elliott, is a leading fancy for Cheltenham’s Ultima Handicap Chase.

Co Meath-based Elliott will tomorrow appear before the Irish Horseracing Regulatory Board to answer a charge of bringing racing into disrepute after a picture of him sitting astride a carcass was published on social media on Saturday night.

The 43-year-old faces a ban from the sport – but McNeill believes Elliott should take a break from training and “get his head together”.

“I think he needs to step away from the sport,” said McNeill.

“It’s hard on you mentally when you have spent your whole life building up this fantastic career and then literally, overnight, it's falling apart before your eyes.

“I think that would destroy anybody's mental health.”

But McNeill, who will remain an owner with the Cullentra stable, warned the Irish authorities not to “destroy” Elliott’s career.

“When I saw that picture – like everyone else – I was horrified and I thought it had to be fake.

"It’s a disgusting picture,” he added. “We all know that.”

“My personal view is that he deserved to be punished for it. However, he's also human and he's got a life to lead.

“I think it would be wrong to destroy that operation, because all you are doing is destroying people's livelihoods.”

Noel and Valerie Moran, whose horses with Elliott include Triumph Hurdle favourite Zanahiyr, yesterday terminated their sponsorship of the Longwood stable, but will wait until the outcome of tomorrow’s hearing before announcing further plans.