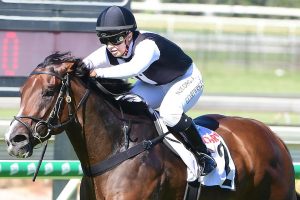 Tony Gollan believes the penny has dropped with talented filly Bleu Zebra but feels she might be slightly vulnerable in her first run of a potential winter carnival campaign.

The three-year-old filly who races in the now well-known Black Soil Bloodstock colours has been her own worst enemy at times during a career which has so far netted three wins from six starts.

Bleu Zebra has had a tendency of overdoing it and being hard-going in her races, although she has continually improved her racing style and made it two wins on the bounce to end her last campaign.

Georgie Cartwright established a good rapport with the filly in those wins and she will ride her again at Doomben on Saturday ahead of campaign which could target black-type races during the winter carnival.

Gollan has loved the improvement in how the filly races and thinks she is a strong winning chance in the 3YO Quality Handicap (1050m) although says she will improve on whatever she does Saturday.

“Although it hasn’t been that long since she raced, she has only had a half-mile jumpout going into this,” Gollan said.

“She might be a little bit vulnerable and will improve off her first-up run.

“Having said that, she has got to be thereabouts on Saturday because it’s only going to get tougher from here.”

On Friday, Bleu Zebra was rated a $5 chance on tab.com.au.

Gollan thinks she will continue her improvement and can be a force in some nice races.

“The penny has dropped a bit with her,” Gollan said.

“She was just a filly that needed a bit of racing, Glen Boss rode her one day and he got off and said exactly that.

“She gives you a good feel but she just needed to learn how to race.

“She was just going too hard and was too keen, whether she was leading or taking a sit she just wanted to go too hard. She just wasn’t giving herself a chance.

“But I am quite pleased with way she is going about things now.”

Meanwhile, Gollan’s outstanding mare Krone has been ruled out for the remainder of the Sydney autumn carnival after being found to be lame.

But Gollan says at this stage there are no plans to retire the five-year-old.

Krone has been a glorious galloper for Gollan since going north to be trained in the Sunshine State and the breeding barn has been under consideration at several stages.

However Gollan said the plan, at the moment, was for retirement to wait and for Krone to race on into the spring carnival.

“They (owners) are talking about going another season with her, at this point in time that’s the plan,” Gollan said.

“They have had some offers, I’m not privy to all that but there was an offer from Japan I believe.

“At this stage she is not entered for the broodmare sale.

“The plan at the moment is she is going to have a break then come back for spring.”

Originally published asZebra still learning how to be a racehorse