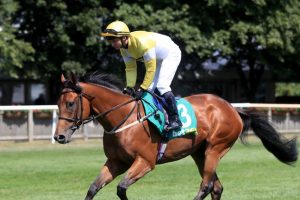 Tom Dascombe was pleasantly surprised to find both his entries in the William Hill Great St Wilfrid Handicap made the cut for the Ripon showpiece on Saturday.

The Cheshire trainer had one certain runner in top-weight Brad The Brief – but expected Lincoln Park to be going for the consolation race earlier on the card rather than the big one.

Dascombe had already booked apprentice Kieran Schofield for Brad The Brief and has snapped up fellow 5lb claimer for Lincoln Park.

“I was expecting Lincoln Park not to get in the main race but as it turns out we’ve got two very good claimers on,” he said.

“They’re both solid handicappers, solid horses, and they both want a bit of ease in the ground. We’ll have to see what happens. Any rain wouldn’t hurt them.

“Lincoln Park has been in great form. He won over seven and a half and he’s just a tough, honest horse.

“We thought we’d bring Brad The Brief back in class and look for his ground. I think his ultimate aim will be the Ayr Gold Cup.”

Lincoln Park lost out by a nose to Mr Wagyu at Haydock last month before winning his last two starts and he renews rivalry with John Quinn’s charge.

Mr Wagyu took the Stewards’ Cup consolation race at Goodwood in tremendous style to set up his bid for the Great St Wilfrid.

“It had to be a career-best last time out. Sometimes these sprinters look like they get quicker as they get older and it looks like he’s one of them,” said Quinn.

“This horse was a nice horse in his younger days, but then he lost his way a bit. He’s come back better than ever this season.

“He’s now into races that are harder to win but the prize-money is great, which helps the job greatly.”

“I can’t believe it. I didn’t think three of them would get in,” said the Great Habton handler.

“Staxton is in great form and working well. He ran a good race at Goodwood.

“Lampang is in good form too. Every time he’s run it’s rained. He goes on soft ground, but is better on good.

“Music Society likes a bit of juice in the ground so if it’s quick he might not go on it, but it should be good ground.”

“Boardman is maybe a soft ground horse. He’s dropping down to six and we hope to run him in the Ayr Gold Cup, all being well.

“Manigordo likes fast ground and looks to be drawn well. Golden Apollo was a touch disappointing at Doncaster, but there was no gallop on for him. He should run well.”

Richard Fahey feels Mr Lupton may not quite be the force he once was, but he was third behind Staxton in this race 12 months ago.

“He’s not the horse he was, but he’s still carrying a rating of 103,” Fahey told Sky Sports Racing.

“He’s been rated between 100 and 113 for the last six years of his life. I think he did dip down to 98 once, funnily enough when he ran in the St Wilfrid and finished third.