Tips and race-by-race preview for Tamworth on Monday

Track improving to around Heavy 8 & rail out 1m from 600m to 400m and True the remainder so on-pace early before likely trend away from the fence.

Improving 3YO Scone gelding 3. Plucky Cuvee can break through at third start. Has closed off nicely in first couple of runs at Moree and Orange, and extra ground ideal, with senior rider hopping on.

Dangers: Newcastle 3YO filly 4. Are Zhou Ready was okay on debut at Pt Macquarie, and can improve here from the inside draw with the blinkers going on. Local 4YO mare 1. Amazing Day has been given a lengthy freshen-up and comes back in trip after being outclassed in a much stronger maiden at only third start; while rival local 5YO gelding 2. Ourtheo has been placed four times from seven starts, and fourth-up this prep can go close.

How to play it: Plucky Cuvee to win
Odds and Evens (First 2): Split 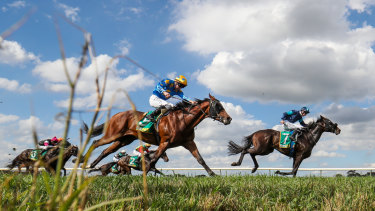 Racing returns to Tamworth with seven races on Monday.Credit:Morgan Hancock

Progressive 3YO Newcastle colt 2. Misterzee broke through on this track at only his second start when heavily backed, and with a nice trail from a low barrier, looks to have this at his mercy. Bred to handle the wet.

Dangers: Doubt there are any, but 4YO Muswellbrook mare 6. Imapoet has made steady progression in her first full prep, winning fourth-up at Moree, and drops 2kg; while honest local 10-year-old gelding 5. Apache Lad can give a sight coming back in distance, and draws to find the lead.

How to play it: Misterzee to win and quinella 2 and 6
Odds and Evens: Evens

Thin race over the mile at set weights augurs well for 4YO Newcastle gelding 2. Mr Piquet who can bounce back after going under as a hot favourite this track third-up. Previous runs were very good for this grade, and extra trip suits.

Dangers: Three runs this prep from 4YO Muswellbrook mare 4. Ellofarock have been encouraging, and should be at her peak now. Newcastle 4YO mare 6. Queens has been competitive enough behind a couple of promising gallopers in her last two; while include 6YO Newcastle gelding 1. Cobb 'N' Co fourth-up at big odds getting out to a more suitable journey. Will find this easier than any of his past three, although was $91.00 in the market when running on behind Mr Piquet last start. Weighted right to his best.

Tough sprint, with a few first starters on show, but keen on 4YO Newcastle mare 5. Constanzia off her strong trial at Muswellbrook. This is the third attempt to ignite her career after debuting over a year ago, and despite the wide draw, she's bred to plough through the ground being by Pierro out of a Mossman mare.

Dangers: It's taken a long time to get 7YO Scone gelding 3. Watchtower (More Than Ready x Danoiserie by Danehill) to the races, but he's trialled strong, and leading rider sticks for his debut. Armidale 4YO mare 6. Lonny Lonny hasn't been far away in some handy maidens this prep, and looks well placed after the 3kg claim. Debutant 3YO Scone gelding 8. Maningrida (Albrecht x Majestic Moon by Honour And Glory) stretched out in a competitive trial five weeks back for strong juvenile stable, but has to overcome a wide gate; while watch the market on local three-year-old filly and first starter 9. Outastep (Sidestep x Ferguson by Danasinga) who has trialled well and sire was a beauty in wet ground.

Looks a race in three, and they're all drawn well alongside each other. Newcastle 4YO gelding 1. Bandahara hit the line hard behind a good horse at Scone at only his second start when well backed from a double figure price. The blinkers go on, and only needs to handle the conditions to be the one to beat.

Dangers: Consistent 5YO Scone gelding 2. Bandjin Rain is an obvious threat after chasing home Misterzee this track last start when hard in the market, and is bred to handle rain-affected going. Was scratched from Coonamble on Sunday. Improving 4YO Newcastle gelding 5. Greenskeeper likes to settle off the speed and find the line, and has only gone down narrowly in his last two in more than handy company. The lone 3YO filly in the race on 54.5kg, Newcastle-based 11. Divine Dream also comes out of that Misterzee race when beaten under three lengths.

Plenty of chances here, and local stables should dominate headed by 4YO mare 4. Steamboat Sally who improved to beat a good Class 1 field at Muswellbrook second-up, and leading rider aboard is a further boost for this tougher test. Should be able to arrest a comfortable lead from the inside draw, and will be hard to run down as long as the inside holds up.

Dangers: Raced sparingly, progressive 4YO gelding 1. General Scarlet is building a smart record, with three wins and two placings from only six starts. Won consecutive races here from the front, either side of a spell, before tackling tougher Highway grade at Randwick, and was swamped late after leading. Will need to work across from a wider barrier, but gets a crucial 3kg claim. Top local trainer Melanie O'Gorman has never had 5YO gelding 3. Autumn Ridge going better. Scored back-to-back dominant wins in late winter before outclassed in a much stronger Highway field at Rosehill. Has trialled since, and drop back to 1200m is a plus. Another local chance 4YO gelding 5. Congregate has roared into his second prep winning both races under 59kg, but obvious tougher test here. Local 5YO mare 9. Fussdinado, stablemate to General Scarlet, keeps improving. Charged home to win a BM 58 here four runs back, and didn't miss by much last start getting home behind the smart Sausalito. Scone 6YO gelding and former Victorian 7. Moshway resumes for his new stable after taking on much deeper company earlier in the year, including a BM 84 at Flemington, and looked full of running winning a recent trial.

Good competitive sprint to finish, and all aboard high class 6YO local gelding 1. Attila second-up in suitable ground for leading trainer/rider combination. Won three straight to finish last prep, and resumed with a fast-finishing effort in a BM 82 this track. Has to carry 61kg, but only concern is the inside late in the day, so may have to chart a path away from the fence before the turn.

Dangers: Consistent local 5YO gelding 4. Inquiry has strong early tactical speed, and scored a dominant win from the front resuming in that same BM 82. Inverell 6YO gelding 2. All Stand is a good wet tracker, and fought hard in an open company behind a smart one at Grafton, and just needs even luck from the wide barrier. Include 5YO Scone gelding 5. Another Sin who won a Class 5 at Toowoomba two runs back before not far away in the Hurricane at Newcastle; while 6YO local gelding 7. The Lion hasn't won for a while, but draws well and normally saves his peak run for second-up.