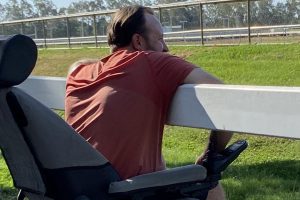 Training horses can be a tough and gruelling profession but the grumbles of most will sink without a trace when you hear the inspirational story of wheelchair-bound Rockhampton horseman Darryl Johnston.

Powered by his $27,000 four-wheel drive wheelchair, Johnston has a positive, can-do attitude and was training horses just six months after being left a paraplegic when the former jockey had a shocking race fall in 2007.

Johnston has a team of just four horses and, incredibly, his last four starters have all been winners.

Lingalonga Lass has scored twice, at Rockhampton and at Bowen, while Charlotte Rules won at Townsville and Beautiful Chelsey got the money at Bowen.

It was a wonderful pick-me-up for the trainer who is the ultimate road warrior, making the 1500km return trip to Townsville in his car with modified driving controls as searches for winners.

There have been plenty of tough times since Johnston became a paraplegic when he crashed to the turf at Rockhampton after a horse in front of him suffered a heart attack.

But you won’t hear a word of complaint – and it is easy to see that Johnston trains for love, not money.

“The only thing I can’t do is ride the horses, I can do pretty much everything else,” Johnston, 37, said.

“I was always going to give away riding anyway and start training before my fall, the fall just sped things up.

“I wanted to get out of hospital as quickly as possible and within six months I was training.

“I do struggle to get owners, I haven’t had a new owner ring me or send me a horse in probably five years.

“I don’t make any money from it, it’s really a hobby, most of the money goes back into the horses or maybe we might buy a new one occasionally.

“Sometimes I will go through a bad patch with not many winners and then all of a sudden something clicks or I just do something a bit out of the ordinary.

“I’m onto my third wheelchair, I have had a horse pull me out of it occasionally but it’s not a problem really.”

Johnston with son Will, who rides trackwork, and jockey partner Natalea Summers.Source:Supplied

While this is a story about Johnston’s great love for horses it is also a story about a love match with his jockey partner Natalea Summers.

The two bonded when Johnston asked Summers to ride a horse at trackwork and they have just about been inseparable in the three years since.

Summers has endured plenty of heartache and tragedy – losing her only son in a car accident in 2019 – and Johnston has been the rock who has guided her through some dark days.

“If it wasn’t for Darryl, I would be in a far worse place as my son was everything,” Summers said.

“Darryl is so stoic and humble but has such inner strength to deal with what life dishes out.

“He really helped me realise how life can still be good after tragedy.

“He is so passionate about the horses and I love them too, so we are a good match.

“Darryl does all the driving to race meetings, he drives with a hand control, I just put his wheelchair on the float with the horses.

“And then when we arrive, the horses come off the float and then the wheelchair comes off.”

Summers is also a rock for Johnston. Not just on a personal front, but also on a work front.

Johnston admits without his partner’s help and that of his family, including his teenage trackwork rider son Will and his mother Cheryl, who performs stablehand duties, he wouldn’t be able to fulfil his passion to train horses.

“If I had to pay someone to do these things, I wouldn’t be able to afford to do it,” Johnston says.

“It’s a real family operation and it’s good we have had some luck lately.

“I thought the horse we had at Townsville (Charlotte Rules) was unbeatable, we had a good bet on her at $9 (the filly won by more than a length paying $3.20).

“The other winners were just placed well in their right races.”

Johnston also wants to pay special mention to Murray and Di Reck – his long-term owners – “If it wasn’t for their faithful support, I wouldn’t have been able to keep training this long,” he says.