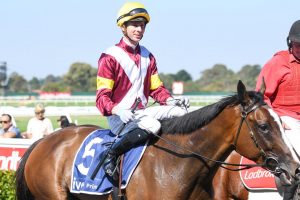 RISING star Steinem is still on track for the Group 1 Australasian Oaks on May 1 despite missing a place in last Saturday’s Group 3 Auraria Stakes at Morphettville, says co-trainer David Eustace.

Steinem was sent out as the raging $1.60 favourite on Saturday but the effort of having to circle the field from the outside barrier of 20 (16 with scratchings) proved too tough a hurdle for the filly. She battled away to finish fourth behind the Trent Busuttin and Natalie Young-trained Tyche Goddess ($41).

Eustace, who trains with Ciaron Maher, said it was all go towards the Oaks for their charge.

“She lost nothing with that run,’’ Eustace said.

“She was probably unlucky not to win but the barrier made it very tough.

“More than likely she will probably go straight to the Oaks without another run.’’

Steinem’s rider Jye McNeil rode a cool race, electing to sit in last place on the hot pop, then peeling out before the turn with a sustained run.

But by the time the field had entered the straight Steinem was still way off the track and attempting to make ground, finishing a plucky fourth although never close enough to be a winning hope.

The daughter of Frankel now has two wins and a third from three starts.

The Maher and Eustace team had better luck with a double, Generation taking out the opening event and Muntaseera saluting in the Listed Redelva Stakes.

Eustace said plans for the two-year-old Generation were still undecided, while Muntaseera would likely be nominated for the Group 1 TAB Classic (Robert Sangster Stakes) on May 1.

McNeil piloted both winners and finished his day in style when he drove Deep Dive home in the final event, a Benchmark 78.

Trainer Ryan Balfour continued his winning way when he brought up a double with the consistent Echo Boomer in a Benchmark 60 over 1600m and stayer Canford which beat stablemate Lostarc over 2500m.

Brimarvi Vehero, trained by Sam Burford, backed up its solid recent form by taking out a Benchmark 78 with Dom Tourneur in the saddle.