TAB On The Punt: Nathan Exelby previews the meeting at Eagle Farm 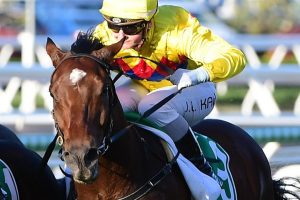 This race has thinned out with two of the other Sydneysiders opting to stay at home, so was surprised to see TAB still offering $5.50 about this. Should have finished closer to Park Avenue at Randwick after tidy effort behind Overpass (fourth in the BRC Sires) prior. Gets every possible chance off the good gate here.

Did a big job in the spring when you consider he had two years off prior. Claimed the scalp of Rondinella 2nd up in that campaign. Much improved now and think last week’s win in Sydney is a lovely platform to leap into this race on the back-up.

Enormous in the Sires off the bad gate. Clearly a career best for him there when ridden much quieter. Can let him find his feet again this time, but doesn’t have to be as far back. Looks terribly hard to beat.

Think Away Game is the key to this race. She is a top-class filly who went winless over the summer, but still raced well. Her first up run when only just gunned down by Isotope was outstanding given she hadn’t raced for 231 days. No trial this time, so market to guide, but if Ciaron Maher and Dave Eustace have her ready to rock, she’s hard to beat here. If she’s not there, Garibaldi becomes hard to beat. He disappointed in the BRC Sprint, when seemingly not seeing out 1350m. Maybe he will be better for the run in that class of race. Prior to that, he looked every inch a stakes horse. Gee Tee Tee next best, but this is tougher.

Converge and Port Louis drew out and went back in the Sires’, whereas Tiger Of Mallay was able to sit much closer and pinch a break on them. Expect them to turn the tables here. Port Louis was given a gun run through the field, but just peaked on his run, whereas Converge went wider, struck trouble and then charged at the end. Both are proven over a mile, but given Converge has drawn better this time and is unlikely to concede the same start, he has the edge. Port Louis may well be the best long term prospect in the race and won’t surprise if he does win this, but the other one seems the more professional at this stage. Consider Giannis the knockout. Will relish 1600m here.

Always tough. Vega One might be the one who has beaten the handicapper, having won a G1 WFA race since weights came out. He showed a turn of foot at the end of that race that very few horses have done at Eagle Farm in recent times. The Harrovian will just keep coming and is off close to a career best in the 10,000. Wild Planet is clearly in great shape going on the 10,000 effort, but unknown Eagle Farm. Further afield in the market, think Imaging has a hope after his terrific run over the trip in the Orr and close up Group 1 WFA runs in Sydney last spring. Niccanova is one that might bounce back off a torrid run in the Kingsford Smith Cup.

Funstar is out to 455 days and 10 runs between wins, but this is the first time she’s been back to her own sex since her three-year-old days. Started favourite in a George Ryder just two runs ago and now posted at $8.50 to win a F&M race. Drawn to get it soft in a race that doesn’t have huge speed. Brooklyn Hustle is going super and did run by Funstar in a recent Gold Coast trial. No reason she can’t see out 1300m. Coventina Bay has a great NZ record and trialled super at the Sunshine Coast. Sweet Deal was enormous after getting way back last time. Odeum has the class, but may need this run after 56 days off.

BLONDEAU (Randwick, Race 9, No.10, $3) looked super sharp winning first up at Gosford, then more dour second-up when rolled as a $1.90 chance. Out to 1400m now looks very suitable and he can atone in what doesn’t look an overly strong race.