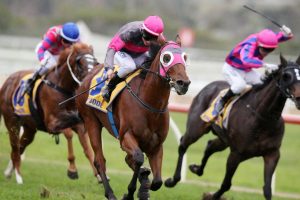 Trainer Symon Wilde might have ended a run of wrong calls with smart sprinter Inn Keeper.

Wilde has Inn Keeper in terrific shape as shown by his win in the Listed Wangoom Handicap (1200m) at Warrnambool in May but luck has deserted the trainer in subsequent decisions.

Wilde decided to send Inn Keeper to Swan Hill for the Gold Topaz last month but a surprisingly hard track confronted the seven-year-old.

“We seem to be zigging when we should be zagging with him at the moment,” Wilde said.

“We went up to Swan Hill for the Golden Topaz and the track ended up closer to a good (3) and that was no help to him.

“Then we went to Caulfield and it was dry again so we’re just pulling the wrong rein with him right now.”

Wilde also entered Inn Keeper for the Mildura Cup but the Caulfield track rating at acceptance time on Wednesday led him to choose the tougher Bletchingly Stakes.

Trainer Symon Wilde has decided to tackle the Bletchingly Stakes rather than the Mildura Cup with Inn Keeper. Picture: Racing Photos via Getty Images.Source:Getty Images

Also in the trainer’s mind was Inn Keeper’s solid fifth at huge odds in the Monash Stakes.

“We saw the track was heavy at Caulfield so I thought ‘bugger it’, and run him there,” Wilde said.

“He closed really well and it looked like 1200m would be ideal. That’s what gave us the encouragement to run in the Bletchingly.

“We thought a wet track and 100m me would be ideal for him because he wasn’t that far from them in the Monash.”

Inn Keeper is a $34 chance in TAB’s Bletchingly Stakes market but Wilde said the son of Host was more of a place hope.

Unless more rain drove the Caulfield track into the heavy range on Saturday.

“If it happened to rain significantly and the track got really heavy, that would bring him right into it.” Wilde said.

“On a soft track, he’d be a cheeky place chance but on a heavy (9) or (10), he’d be some sort of chance because some of the better ones probably wouldn’t run.”

Dean Holland will ride Inn Keeper in the Bletchingly Stakes.