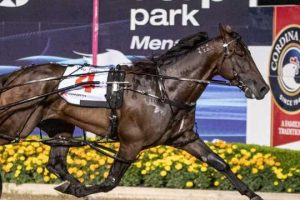 Australia’s best pacer King Of Swing sparkled in a trial ahead of his return to racing at Menangle on Saturday week.

Driver Luke McCarthy was chuffed after the mighty pacer cruised to victory over stablemates Bright Energy and Better Enforce in a comfortable 1min 52.4sec over a mile at Menangle on Wednesday morning.

“He’s actually ready to race and probably has been for a couple of weeks, but there’s no rush. We thought we’d just sharpen him with the trial today,” McCarthy said.

“He’ll go to the free-for-all (2300m) at Menangle next Saturday night. It’ll be the first of two runs before he heads to Queensland for a couple of big races up there.”

King Of Swing is trying to defend the Blacks A Fake crown he won last December after the race pushed back five months because of Covid-19.

He hasn’t raced since winning his second Miracle Mile at Menangle on March 6.

“We’re looking forward to getting him back to Queensland and back into the good races. He feels like he’s come back really well,” McCarthy said.

King Of Swing will headline a team of stars McCarthy and his wife, Belinda, are taking to plunder the amped-up TAB Constellations – formerly the Queensland Winter Carnival – at Albion Park next month.

“Expensive Ego is a couple of weeks away. He’ll have just the one Menangle run before he goes to Queensland. His first target is he big, new race (The Rising Sun, July 10),” McCarthy said.