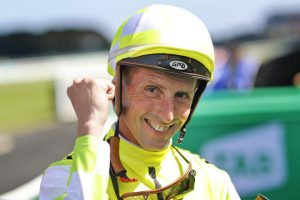 Star jockey Nash Rawiller had to be taken to hospital after suffering an injury to his right foot before the opening event at Hawkesbury on Thursday.

Rawiller was leaving the mounting yard on the Gerald Ryan and Sterling Alexiou-trained Fine Ruby in the TAB Class Handicap (1800m) when his foot became wedged against the fence.

He immediately dismounted from the five-year-old gelding clutching his right lower leg before he was attended to by on-course paramedics.

The three-time Sydney premiership winner sustained a laceration to his foot in the incident and was taken to Hawkesbury Hospital without the assistance of an ambulance but Rawiller had reportedly suspected he had also broken a bone.

It comes at a terribly unlucky time for Rawiller as the spring carnival looms for 2021.

He has a strong book of rides lined up for Saturday’s Winx Stakes meeting at Randwick including aboard the John Thompson-trained Dreamforce in the feature event.