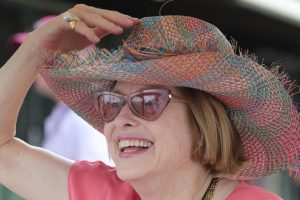 The Queen and the Wizard – could they be a perfect (racing) match?

Racing’s first lady Gai Waterhouse and wizard of the west Willie Pike will team up for the first time on the Gold Coast next Saturday and each could not be more thrilled.

Pike will be spending the week on the coast tourist strip with his partner Jessica and their two kids Jett and Aspen before the 13-time Group 1 winning jockey rides on Hollindale Stakes day next Saturday.

Among his rides will include Waterhouse and co-trainer Adrian Bott’s three-year-old filly Nothinsweetaboutme which will race in the Listed Gold Coast Bracelet as a stepping stone to a potential path towards the Group 1 Queensland Oaks next month.

Waterhouse told The Courier-Mail she had watched Pike, who has won four Victorian Group 1s this season, with great admiration in recent times.

“It will be great to have him ride for us next Saturday on a filly who could be on an Oaks path.

“The filly he will be riding, Nothinsweetaboutme, is well-named because she has a really quirky personality.”

Pike is chuffed to be riding for the first time for one of the all-time greats of Australian racing.

“I feel like my career has been going well lately and this will be another exciting step, riding one for Mrs Waterhouse,” Pike said.

“Everyone knows the Waterhouse name and it will be a big thrill for me and a really nice moment in my career to be riding one for her and Adrian.

“I am really looking forward to getting to the Gold Coast and riding in Queensland for the first time.”

Nothinsweetaboutme has won two races from her three career starts, most recently finishing fourth behind Miravalle in the Group 3 Kembla Grange Classic (1600m) on March 12.

The daughter of So You Think prepared for a Queensland winter carnival assault when finishing third in a 1200m trial at Randwick on April 20.

Pike’s main ride on the Gold Coast next Saturday will be 2020 Australian Cup winner Fifty Stars for Lindsay Park.

Champion jockey James McDonald will make his first appearance of the Queensland winter carnival next Saturday with Gold Coast rides including Zaaki in the Hollindale Stakes.

McDonald, who holds a big lead over Tommy Berry in the race for the Sydney jockeys’ premiership, will decide week by week whether he rides in Queensland or remains in Sydney to ride on Saturdays.

He is expected to be a major presence in Queensland this winter.