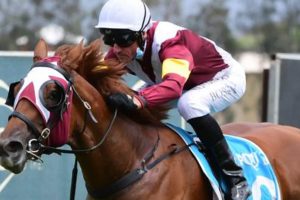 The blueprint set by Tony McEvoy three years ago is still fresh in the mind of southern trainers as they hope to emulate the feat of backing up into the Magic Millions 2YO Classic.

Ben Hayes cited McEvoy’s lead as the reason Lindsay Park has taken a different path to this year’s Magic Millions.

Hayes’ father David has notched seven placings in the Classic without winning, most recently with Madeenaty four years ago.

“It’s been a bit of an unlucky race for us, but we’ve tried something different to our traditional way,” Hayes told Radio TAB’s Past the Post.

“We got the horse up here early after watching the success of Sunlight and a couple of others that backed up into the race.”

McEvoy sent Sunlight to Queensland early and she’d had two runs at the Coast prior to MM day, including the week before.

“Just having a look at the Gold Coast course, it’s a very tight track and unique. For a horse to have a feel before the actual race is a big advantage,” Hayes said.

“That was our plan and it was good to see him handle it. If he draws a good gate he will put himself in a good position and be right in the race.”

Adrian Bott has attributed blinkers contributed to Swift Witness jumping out of the ground.Source:Getty Images

Five of the past eight Classic winners ran the week before the race, including four of the past six at the Gold Coast.

It’s a statistic Adrian Bott noted after his and Gai Waterhouse’s filly Swift Witness burst into contention after winning the Gold Pearl on Saturday.

“You take confidence in the pattern of that race day producing plenty of winners in the race,” Bott said.

Bott felt it was a combination of race experience and blinkers that contributed to Swift Witness jumping out of the ground on Saturday, with her now being $6 second favourite behind her Wyong conqueror She’s All Class.

“That race (Wyong) came up quick for her. It was a bit of an ask to have her first start in that particular race giving away racing experience and that certainly showed against the winner,” Bott said.

“She only had a trial six days (before) going into that race.

“I can’t speak too much for She’s All Class, she was obviously very dominant, very impressive in that particular race.

“But on that day she had the advantage of race experience. I would like to think we have improved significantly off that.

“No doubt a huge amount of respect for She’s All Class and we will continue to hold that, but in assessing our own individual filly, I think it’s very fair to say she’s made up a significant amount of ground and closed that gap.”

Justin Huxtable is worked on in the mounting yard at the Gold Coast after being kicked. Picture: Mike BatterhamSource:News Corp Australia

Justin Huxtable received some favourable news on Sunday, but the in-form apprentice will still be sidelined for some time as doctors ensure there is no further internal damage.

Huxtable’s master Chris Munce went to visit the youngster in hospital on Sunday.

Huxtable was kicked by the clerk of the course’s pony after being dislodged from Munce’s Rhapsody Rose in the mounting yard at the Gold Coast on Saturday.

He was taken to hospital, with damage to his ribs and while he was cleared of any breaks, it was later discovered he had ruptured his spleen.

“He was in good spirits. He’s still pretty sore, but fortunately no broken bones, which is good,” Munce said.

“The doctors are hopeful (the spleen) has stopped bleeding. They were worried they might have to operate. They will monitor him for the next day.

“He thinks he’s getting out (Monday), but I think they will keep him until Tuesday.

“Other than that, he seems good. Overall he was pretty damn lucky.”

Munce said Rhapsody Rose’s pre-race antics were out of character and speculated whether it was the addition of blinkers or the excitement of a big race day which set her off (after dislodging Huxtable, she also got ride of replacement rider Ben Thompson before the race).

“Normally she’s quite a quiet filly and she was as quiet as a lamb in the ties ups,” Munce said.

Horse Racing: With only a few strides to go the heavily backed favourite has slammed on the brakes leaving punters heartbroken….

Horse Racing: With only a few strides to go the heavily backed favourite has slammed on the brakes leaving punters heartbroken.

Rhapsody Rose would be the 15th horse into the race on the latest count, based on which horses are running.

If she doesn’t accept, it would pave the way for Golden Eighty to secure the final spot in the field.