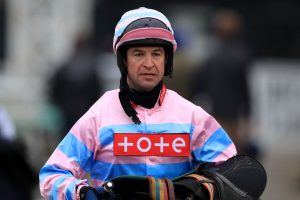 Robbie Dunne stood “swearing and mouthing off” at amateur rider Hannah Welch after a race at Chepstow in November 2018 as the weighing room looked on, it was claimed.

Dunne is charged with bullying and harassment of Bryony Frost during February 13 and September 3 last year – and faces a ban of up to three years from racing or a £15,000 fine.

As the hearing before a three-strong independent judicial panel entered its third day on Thursday, Welch, 24, recalled a confrontation after the SSAFA Armed Forces Charity Handicap Hurdle at the Monmouthshire track on 21 November 2018.

Former point-to-point rider Welch, who rode seven winners from 70 rides under Rules before quitting the sport in November 2019, said: “Mr Dunne placed himself right in front of me and was swearing and mouthing off at me. He shouted at me and swore at me multiple times.

“The incident occurred in front of the entire weighing room. I was crying and did not say anything back to Mr Dunne.

“When I look back on this I find it bizarre that none of the other jockeys who witnessed this incident intervened and said to Mr Dunne that he had gone far enough.

“I was incredibly upset after the incident and it was a contributing factor to me giving up National Hunt racing.”

When Dunne’s barrister Roderick Moore suggested “the temperature is necessarily going to be hotter” in an “elite sport” Welch replied: “In my opinion this goes beyond the temperature being hotter”.

The case’s investigating officer, former BHA head of integrity Chris Watts, admitted to taking a “victim-focused” approach to the probe – as opposed to seeking “a balanced picture” when accused by Moore of selectively editing witness statements.

Tom Scudamore complained to John Burgess, appointed the BHA’s acting head of integrity upon Watts’ resignation in September, that his original account “does not fully represent my opinion” while there were also alleged omissions from the testimony provided by Gavin Sheehan.

Watts further conceded “it was worrying” that Dunne’s apology to Frost following a post-race altercation at Stratford on July 8 2020 – the Irishman admits a charge of “acting in a violent or improper manner” – featured in a recorded interview but was then removed from her written statement at the insistence of the five-time Grade 1 winner’s father Jimmy.

But Watts denied claiming to be “a very good friend” of Jimmy Frost – and making regular visits to the trainer’s holiday chalet in Devon.

“That is just absolutely ludicrous,” he told Moore.

The hearing continues next Tuesday.