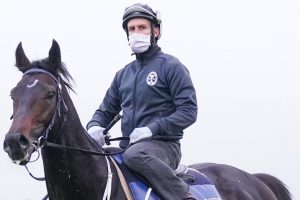 One of the loneliest places in racing for a jockey can be in the car after a bad day at the track.

Given the risks involved in the sport bad, of course, is very much subjective, but the perils of weight management, fatigue and the expectation to win takes a toll on riders of all ages and experiences.

Throw in a riding blunder or beaten favourite in the mix and the pile on, at the very least, feels relentless.

Keyboard jockeys get a crack, in a virtual sense, before a trainer, owner or commentators stick boots in.

It is why retired Group 1 jockey-turned-mentor James Winks makes a point of not being the next person to deliver a spray.

“We have one rule, talk before and 100 per cent after the races,” Winks said.

“I think that’s where they get most benefit and can dissect what went right, where we went wrong, how we can improve.

“Just get it off our chest and clear our head and work out how to tackle the next day.

“What’s done is done, you have to solve it and move on to the next day.”

Truth be told the car ride on the way home after the races should be a celebrated given the risks taken daily to put food on the table.

“I want them to leave the racetrack and realise riding is only their job,” Winks said.

“If you walk out of that racetrack every day and get home to your family, well then you’ve won on the day in my eyes, because as we know the sport we’re in and unfortunately things can happen.”

Diagnosed with syncope — medical term for fainting — the five-time Group 1 winner was urged to hang up the boots as strenuous exercise, fasting and sweating triggered the condition.

While coming to terms with everything, and the realisation he would never feel the thrill of riding a winner again Winks, on advice from Matt Hyland, agreed to mentor Sydney jockey Regan Bayliss.

Word of mouth has led to more jockeys calling on Winks and turned what started as a distraction in to a hobby and business ultimately.

Winks has 12 jockeys on the books across four states.

Pulling apart rides and offering technical pointers helps, not as much as the simple act of listening.

“You got to remember the majority know when they’ve made a mistake anyway,” Winks said.

“They’re already flat on themselves … I’ve been there and done it, you don’t want to drive all the way home and have someone else rip into you.

“We try and pick out what went wrong and try and rectify it, we all make mistakes, a lot of people forget that.

“Punters are brutal, some of the things they (jockeys) get on Instagram and that is f—ing disgusting.”

Emerging Group 1 jockey Childs has taken benefit from being able to bounce ideas off Winks.

To a point the 25-year-old, who until recently was sidelined for about five months with a fractured shoulder, acted as a sounding board for apprentice Thomas Stockdale during the injury lay-off.

“It’s good to have that feedback, it doesn’t matter how good you are (it can be helpful),” Childs said.

“It’s good to call him after the races and he’ll say you could’ve done this or this better, or you did everything you could it just didn’t work out today.

“Everyone (other sports) has got a coach, in racing you don’t necessarily have that and I was keen to give it a go and it’s certainly paid dividends.”