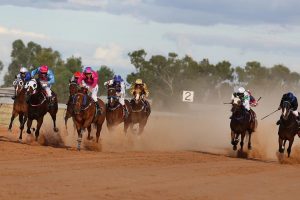 Racing Queensland are considering incentives for country trainers to take on apprentices in an attempt to stop a bush jockey shortage which saw 288 horses scratched last year.

Officials are struggling to attract riders to outback Queensland with many preferring to base themselves out of the southeast, affecting the north and central west regions such as Cloncurry and Longreach.

Last year 1129 non-TAB races were conducted by Racing Queensland which saw 288 horses scratched due to a jockey being available to ride, about three per cent of runners.

Racing Queensland chief executive Brendan Parnell acknowledged the shortage and said it was a major priority to remedy it as soon as possible.

With a number of trainers also crying out for more trackwork riders, Parnell said the governing body was going through the correct protocols to attract overseas riders to Queensland also.

“We are looking at incentives around encouraging trainers to take on apprentices in regional Queensland, what that looks like we don’t know yet,” he said.

“It is a Commonwealth requirement, which we are working through at the moment then we will be able to go back into the recruitment for overseas trackwork riders and apprentices.

“We would be able to approach a number of countries once that is in place. At the moment we can’t have a foreign student until we get that accreditation.”

Parnell said apprentice recruitment numbers were on the improve and are currently outperforming both New South Wales and Victoria.

“The challenge isn’t necessarily recruiting more, it is incentivising them to go to regional Queensland,” he said.

“Our enrolment numbers are good, the last 18 months have been spend in a recruitment drive and over the last three years it is up about 50 per cent – we have the most apprentice jockeys of any major state.

“We have 54 apprentices, New South Wales has 46 and Victoria is less than that again.”

In the short term to alleviate the pain, Parnell said some regional clubs were looking at moving away from Saturday meetings to allow the jockeys to compete at more meetings.

This season Ewan, Cloncurry, Chinchilla and Thangool will all host midweek TAB meetings for the first time.