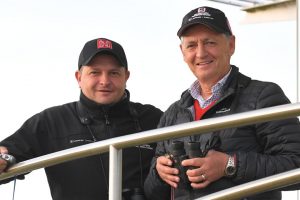 The Daily Telegraph’s racing editor, Ray Thomas, is keen on a recently gelded son of I Am Invincible to break his maiden at Kensington.

King Of Sparta has been competitive in some very good two-year-old races this season including a narrow loss to Hilal on this track. He’s been gelded during his break and has been dynamic in successive barrier trial wins in recent weeks.

Promise Of Success won brilliantly first-up then got caught on the worst part of the track last week but kept working hard to the line to finish third. She’s obviously done well since to be backing up here and is clearly the one to beat.

Josh Parr can continue his good form at Kensington where he has several top rides. Photo: Getty ImagesSource:Getty Images

Josh Parr is riding in great form and comes off a Rosehill treble last Saturday with six rides at Kensington including Lucky Sun (race 2) and White Boots (race 7).

Palaszczuk led for home and fought on well when third at the Gold Coast over 1400m. Fitter for three runs from a spell, drawn well and this is a very winnable race.

Acrophobic gave 4kg to Betty Blooms and that was the difference when a close second at Kensington. He’s had six weeks between runs but his Hawkesbury trial caught the eye when he stretched out generously late. Drawn nicely and will go close.

Les Kelly has a competitive team for the Grafton meeting including War Toy (race 4) and Guineas hopeful Tamilaide (race 6).

THE INSIDE MAIL FOR KENSINGTON

Silly Point was resuming when narrowly beaten by Zariya with Barrichello a close third. Silly Point showed good tactical speed at Canterbury and fought hard under pressure. He’s had a month between runs, he’s been kept fresh for this, will strip fitter and should go close. Barrichello has loomed up to win in successive Canterbury starts only to lose narrowly. He has to be rated among the main chances again. Cat D’Oro has been placed in four of his five starts, handles soft tracks and has had two trials to prepare for his return. First starter Mystic Rebel has won successive barrier trials and is one to watch.

King Of Sparta is winless after four starts but has run fourth in the Silver Slipper and Kindergarten Stakes. He has been gelded since his autumn campaign but his two barrier trials recently have been exceptional, unleashing brilliant bursts of acceleration. He’s ready to win. Lucky Sun has led early before competitive efforts at Warwick Farm and Kensington. Inside barrier helps and he will be in this for a long way. Military Expert, a Redoute’s Choice colt who was knocked down for $1.1 million at the Magic Millions, looked very good winning a Wyong barrier by a widening margin. Mikasa impressed finishing hard wide out in a Randwick trial a month ago.

Promise Of Success drew the inside and was caught on the worst part of the track when third at Warwick Farm last week. She had won at her Australian debut in spectacular style at her previous start and can bounce back here. Rosa Moyessi won well at Goulburn then ran up to that effort when closing late to just miss at Warwick Farm. Hard to beat again. My Demetra was scratched from Rosehill last Saturday and saved for this easier race. Resuming here but sprints well fresh, handles soft tracks and has impressed in two recent trials. Lunar Tramp is coming back from Saturday grade and should be very competitive.

Bet: Promise Of Success to win

Bring The Ransom has had two runs back in stronger Saturday grade and drops back to the midweeks. She wasn’t beaten far when sixth to Expat last start and the form from that race has held up since. Lucicello finished behind Bring The Ransom at her most recent run but she is better than that and she does race well on this track. Yukon won two of his four Melbourne starts but was trapped three-wide at Randwick when resuming and dropped out of the contest in the straight. Give him another chance. Lightweight Eden Vale can run a race at odds.

Skedaddle was restrained early just off the speed and then battled on fairly when a first-up fourth at Kensington last month. She won her only other start back in February when allowed to use her natural speed. The query is the 1300m but expect her to be ridden with more intent early this time. If she can lead and dictate terms, she will be hard to run down. Nikau was chasing a hat-trick of wins this campaign when a good third at Warwick Farm last start when she didn’t have the best of luck in running. In very good form and rates highly. Lucky To Win and Son Of Sampson both come off dominant provincial wins and can measure up this grade.

Miss Jay Fox and Rustic Steel, both withdrawn from Rosehill last Saturday and saved for this race, look very hard to beat. Miss Jay Fox has made rapid improvement this preparation, winning three races and being placed at Rosehill behind Magic Ruler last start. She has the tactical speed to negate her wide draw, she will settle on speed and give a great sight again. Rustic Steel is an emerging young sprinter resuming here but showed he was primed with a stylish Gosford trial win. Drawn the rails and will be stalking position from the turn. Ranges is very fit and racing well, and Yangarra Rose won with authority at the provincials and is an improver.

Maccomo has been placed in five of his six starts this campaign including his third to Meg in Saturday grade at Rosehill. Drops back to the midweeks which suits, likes to lead in his races, gets in well at the weights after the claim, handles this track and distance, and is effective on soft going. This is his chance. O’Mudgee is on the quick back-up after his game third to Papal Warrior at Rosehill last Saturday which is good form for this race. White Boots is as tough as they come and races well fresh. Dundee Lee is back in winning form.

Blazing Miss ran on well for a close third to Lillemor in a Listed race at Ipswich. She has been placed twice in four starts this campaign and is working up to a win. Drawn well and should get the right run. Southern Lad looks well placed. He’s ran three solid races this time including his second at Eagle Farm in a strong form race. Another drawn to get all the favours. Fender tried hard in the Civic Stakes when sixth to Bandersnatch. He’s racing in good form and has drawn well. Snitz has the ability to win this but the wide draw is a big leveller.