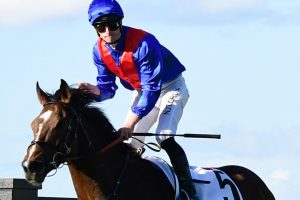 Riding ace James McDonald says exciting rising star and “spunky dude” Zaaki reminds him of Hartnell when the champion Godolphin galloper was approaching the peak of his powers.

McDonald was once the Blue Army’s No.1 Australian-based jockey and rode import Hartnell in his early trials Down Under and to a pair of imposing Group 1 wins in 2015 in 2016.

Zaaki is preparing to step out as the $1.50 favourite in the $1.2m Q22 (2200m) at Eagle Farm on Saturday after surging into Cox Plate favouritism with his devastating seven-length winning blitz in the Group 1 Doomben Cup.

McDonald wants to see the Annabel Neasham-trained import do it again on Saturday before he is declared the real deal for a race like the Cox Plate.

But McDonald knows he is on a hugely talented galloper and sees glimpses of the now-retired four-time Group 1 winner Hartnell in Zaaki.

“He reminds me of a pretty good horse back in my Godolphin days.

“He is a very similar horse to what Hartnell was, a horse that has a high cruising speed and could dash off a fast pace and simply love it.

“The tougher the race, the better that Hartnell was, and I see a lot of that in Zaaki.

“Hartnell was a superb horse and this horse is not there yet, hopefully he can reach that level.

James McDonald celebrates after winning The BMW with Hartnell in 2015. Picture: AAPSource:AAP

“I know Zaaki’s performance in the Doomben Cup was scintillating but I still want to see him do it again to be honest with you.

“If we are talking Cox Plates, I don’t think he has to improve much off that Doomben Cup win but he has still got to meet that expectation of consistently high standards so I’m looking forward to seeing if he can back it up.”

With Zaaki set to be one of the star attractions on Stradbroke Handicap day, McDonald has given an insight into the exhilarating feeling of knowing he was going to win a long way from home in the Doomben Cup.

Brandeburg had rolled along in front in the Doomben Cup (2000m) with Zaaki sitting in second and then unleashing a blistering turn of foot when McDonald pushed the go button.

“That day I just rode him as if he and the leader were the only horses in the race,” McDonald said.

“People might have thought I went a little bit early on him, but he was going basically half-pace on the corner and he just turned for home and I gave him a reminder and he accelerated unbelievably well.

“I didn’t even realise that I was seven lengths in front.”

The rich Q22 looks like Zaaki’s race to lose if he turns up in the same form as when he last raced.

Two possible queries could be the firm Eagle Farm track – where he will be racing for the first time – and the step up in distance to 2200m.

“Eagle Farm does present a new challenge, but in saying that he is pretty adaptable,” McDonald said.

“Personally I think his best distance will be ten furlongs (2000m), so I am looking forward to him stretching out over 2200(m) and see if he can show a bit more stamina and therefore be even stronger over the 2000(m) when we do bring him back in trip.”

Saturday’s race will be the last time Zaaki is seen until the spring carnival where a Cox Plate mission looms.

He is currently the $3.50 Cox Plate favourite on TAB.

Neasham is leaving no stone unturned in a bid to win the Q22, this week flying up Zaaki’s farrier from Sydney to Brisbane to be with him as part of the preparations for the rich race.

Queensland mare Vanna Girl has been scratched from the Q22 as she has a hoof abscess.