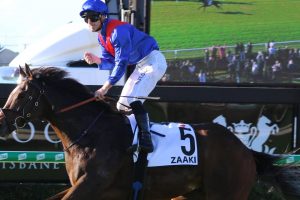 Imagine a clash between Horse of the Year-elect Verry Elleegant and emerging superstar Zaaki at weight-for-age over the Royal Randwick 2000m course on Epsom Day during the Sydney spring carnival?

The race would be a scene-stealer but the chances of it happening later this year are slim – unless the Group 2 Hill Stakes is given an immediate prizemoney boost to at least $1 million.

The Hill Stakes, run on Epsom Day, is currently worth $500,000 but there are attractive Group 1 2000m options in Melbourne during this period of the spring carnival including the Turnbull Stakes and the Caulfield Stakes, which has double the prizemoney.

If the Hill Stakes had sufficient prizemoney to make it a pinnacle, middle distance weight-for-age race, it would entice connections of elite Sydney-trained gallopers like Verry Elleegant and Zaaki to consider remaining here longer during spring in the build-up to the Cox Plate and the Cups in Melbourne.

Sydney’s spring program has been bolstered significantly in recent years with the introduction of big-money races catering primarily for sprinters and milers including the $15 million The TAB Everest, $7.5 million Golden Eagle, and The Hunter and The Gong, both worth $1 million.

But with the 100th running of the Hill Stakes this spring, the timing is appropriate for a prizemoney to $1 million or more which would make it a real target race for the best 2000m weight-for-age horses.

The Hill Stakes already boasts an honour roll that reads like a “who’s who” of Australian racing.

Some of the champions to have won the Hill Stakes include Phar Lap, Peter Pan, Gloaming, Chatham, Bernborough, Shannon, Redcraze, Sky High, Baguette, Gunsynd, Grand Cidium, Emancipation, Beau Zam, Super Impose, Saintly and Tie The Knot so the race has the history to warrant a substantial stakes increase.

Verry Elleegant won the Hill Stakes two years ago but the Chris Waller-trained mare has clearly gone to a new level this season with five Group 1 triumphs in the Winx Stakes, Turnbull Stakes, Caulfield Cup, Chipping Norton Stakes and Ranvet Stakes which should ensure she claims the Horse of the Year title.

But boom import Zaaki has created such an impression in his debut Australian race campaign for trainer Annabel Neasham he has been installed as early Cox Plate favourite at $3.50 ahead of Verry Elleegant at $8.

Champion galloper Tie The Knot (right) was victorious in the 1999 Hill Stakes for Shane Dye and Guy Walter.Source:News Corp Australia

Zaaki, a runaway seven lengths winner of the Group 1 Doomben Cup last start, has his final race for the season in the Group 2 $1.2 million The Q22 (2200m) at Eagle Farm on Saturday.

There are 17 nominations including seven individual Group 1 winners for The Q22 but Zaaki casts such a giant shadow over the field he is already rated $1.50 favourite ahead of Toffee Tongue at $7.

The Randwick meeting has a bumper 169 nominations across nine races including promising three-year-old Ellsberg in the Racing To Win Handicap (1600m) and emerging bush sprinter Ice In Vancouver in the Benchmark 78 Handicap (1000m).

From the Golden Slipper to the championships, Sky News takes a look back at the wonder of the Autumn Racing Carnival….

From the Golden Slipper to the championships, Sky News takes a look back at the wonder of the Autumn Racing Carnival.

Originally published asVerry Elleegant and Zaaki in race for the ages