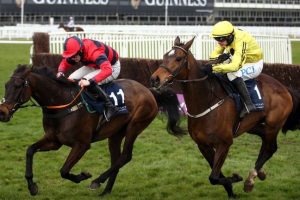 The pair crossed the line virtually inseparable after a ding-dong tussle on the run to the line, but it was Porlock Bay who got the verdict.

Porlock Bay is usually ridden by his trainer Will Biddick, the most prolific winner of point-to-points in the UK and a winning rider at the Festival, but with amateurs unable to ride due to covid restrictions, he booked Lorcan Williams for the ride.

The conditional jockey proved an able substitute as he got the better of Paul Townend on the Willie Mullins-trained Billaway, was also second 12 months ago.

Williams said: “He jumped the last really well and I’m delighted for Will, who was always sort of an idol of mine growing up. It’s been a pleasure to ride for him.

“We weren’t sure he would stay the last day, but I felt he did stay and I wasn’t overly hard on him. He’s come out fresh today and in really good form.

“I was always one or two off the rail and going down the back I gave him a bit of light and I wanted to make our ground and be handy at the top of the hill.

“He sort of just came alive and I was probably going too well.

“I managed to fill him up and his jumping was so accurate, which has probably just got him there.”