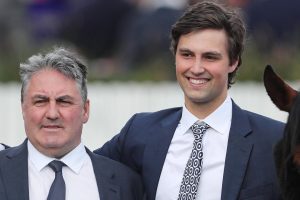 Three-year-old filly Zouzarella has been heavily backed ahead of her debut at The Valley on Saturday.

The Group 1 Thousand Guineas-nominated daughter of Zoustar is the TAB $3.70 favourite after opening $6 on Wednesday.

Zouzarella accounts for more than 50 per cent of TAB’s hold inside the first 24 hours of betting.

Co-trainer Sam Freedman moved to temper the expectations on the “promising filly”.

“Going to have her work cut out on debut against some seasoned fillies, 1200m first start around The Valley, it’s not an easy task but she’s a filly with a fair bit of promise,” Freedman said.

“It’s one of those things, you’re excited to see them run but you want it over and done with to hopefully get vindicated by seeing a good performance.”

Zouzarella jumped out sweetly at Cranbourne recently, settling on the speed and going to the line untested behind the equally impressive Invincible Caviar.

Peter Moody-trained Invincible Caviar, the daughter of Black Caviar, will return to the races next week.

Prior to the sustained market push on Thursday the TAB recorded significant bets on Zouzarella to win the Group 1 Thousand Guineas on October 13.

Freedman is open minded about pacy Zouzarella, now a $17 chance for the Thousand Guineas.

“The Thousand Guineas would be a lovely race to get her to, but whether she runs (1600m) who would know just yet,” Freedman said.

“We’ll learn a lot about where she heads after Saturday … she’s got to translate her trackwork and trial work to race day and if she does that she should hopefully show a bit of excitement there.”