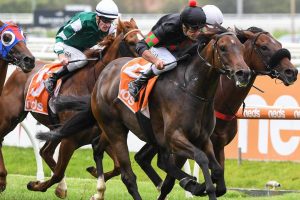 Patrick Payne got a good guide on the quality of horse needed to win an Australian Cup in his riding days but is unsure whether his charge Defibrillate will measure up in Saturday’s $1.5 million contest.

Payne rode Northerly in the WA superstar’s second Australian Cup win in 2003 in the years before his successful transition to training at Plumpton on the western outskirts of Melbourne.

A former Kiwi, Defibrillate has won seven of his 10 starts for Payne, including his last-start success in the Listed Mornington Cup Prelude (2000m) at Caulfield last month.

But Payne still wonders where Defibrillate’s potential will take him.

He’ll test the six-year-old, part-owned by New Zealand cricket legend Brendon McCullum, at weight-for-age for the first time at Flemington.

“I should know how good he is, but I don’t know,” Payne told RSN.

“I am confident he will run well, but whether he is good enough at weight-for-age (is unknown).”

Defibrillate is yet to race beyond Listed level but Payne said star qualities might not be required to win this year’s Australian Cup.

Last year’s winner Fifty Stars is the top-rated runner on 112 but Payne said the lure of Saturday week’s $5 million All-Star Mile has swayed connections of other topliners away from the Australian Cup.

“When you have a look at the entries, he might not be good enough, but there is nothing that really frightens you,” Payne said.

“When you start going into the form of the Australian Cup, it probably isn’t as strong as what it normally is.

“Everyone is more concentrating towards the All-Star Mile or Sydney.

“We thought we would have a crack at it.”

Payne said the Australian Cup would be a pivotal point in Defibrillate’s preparation.

A strong performance would convince the trainer to target Group 1 features in Sydney.

The Listed Mornington Cup would be the likely option should Defibrillate fail to make the grade at weight-for-age at Flemington.

Defibrillate is a $12 chance to notch his maiden Group 1 win with Billy Egan in the saddle.