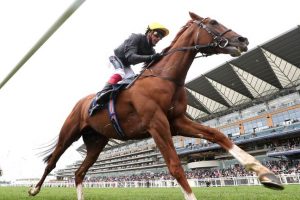 Owner-breeder Bjorn Nielsen is in bullish mood ahead of Stradivarius’ bid for a third victory in the Weatherbys Hamilton Lonsdale Cup at York next week.

With three Gold Cups at Royal Ascot, four Goodwood Cups, back-to-back wins in both the Yorkshire Cup and the Lonsdale and a Doncaster Cup thrown in for good measure, it is fair to say the seven-year-old’s status as one of the sport’s great stayers has long since been assured.

However, John and Thady Gosden’s charge will return to the Knavesmire with a point to prove on Friday week following four defeats in his last five starts, most recently finishing fourth when seeking to claim a fourth Gold Cup in June.

Connections decided against challenging for a fifth Goodwood Cup win last month due to the prevailing testing conditions on the Sussex Downs, but Nielsen is confident he can get back on the winning trail at York, where he is unbeaten in four starts.

Stradivarius plundered the Weatherbys Hamilton Stayers’ Million with victory in the Lonsdale in both 2018 and 2019, but the bonus has since been discontinued.

Nielsen said: “The bonus no longer being there makes the Lonsdale slightly different this year, but in my mind I don’t think it’s a question of other horses beating him. He’s seven now, but as long as he’s still got it he’s going to win.

“York is the one place we’ve always had the good, or good to firm ground Stradivarius prefers and he’s never been beaten there.

“The day he’s beaten when he has his conditions then that will probably be it, but from what I hear he’s still full of it.

“Frankie (Dettori) and John (Gosden) have both told me how well he’s working, so I hope it lasts a few more races.”

Nielsen revealed talks are ongoing with several breeding operations ahead of a future career at stud for Stradivarius, but at the moment he is fully focussed on what is left of his glittering racing journey.

He added: “We’d have loved to have gone for that fifth Goodwood Cup and in previous years we might have run him, as it was heavy summer going – but at this stage of his career, we just don’t want to do it.

“He’s still got that enthusiasm, and we don’t want to spoil it. As long as he’s got it he’ll perform, but as soon as it’s gone then his time is up, so why ask him to do things he doesn’t enjoy?

“There is interest from two or three studs in England, and foreign interest as well, and when his time comes he can hopefully pass his qualities as a racehorse.

“I’d obviously prefer him to stay here, but the key thing is that I want him to have the best chance possible to cover Flat mares. I don’t want him going straight down the jumps’ stallion route, as a lot of mile-and-a-half plus horses have done in recent years.”