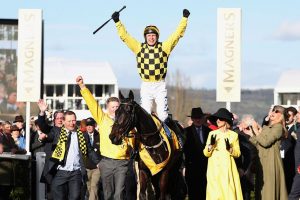 AL BOUM PHOTO is the pick in the feature Ladbrokes Punchestown Gold Cup (5.55) on day two of the festival.

The dual winner of the Cheltenham version has an excellent chance in the Grade 1 after reigning champion Minella Indo was ruled out due to a bruised foot.

Third behind him at Prestbury Park, when racing for a historic hat-trick, Al Boum Photo did not quite have the firepower on the day to see off two new challengers.

He must overturn form with Kemboy in this race from two years ago, but the forecast pace from him and Clan Des Obeaux will really suit and bring his stamina into play.

Fakir D'oudairies is a longer price and is worth a try over the trip of just beyond three miles, given how he finished at Aintree.

He also ran at Cheltenham and this tough campaigner has to be considered, with 6lb to find with the selection.

Given a fine ride at Cheltenham by Rachael Blackmore, he can confirm the form with Kilcruit back on home turf.

She impressed at Cheltenham 41 days ago, form which has been franked – and her allowance brings her right into the mix.