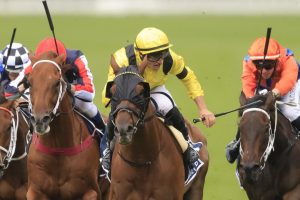 Beaten Queen Elizabeth Stakes contender Mugatoo is set to push onto the Doomben Cup while fourth placegetter Think It Over is headed to the paddock with the Cox Plate now on his radar.

The Kris Lees-trained Mugatoo only beat one runner home when sixth in the Group 1 Queen Elizabeth Stakes but was less than two lengths off the winner, English raider Addeybb.

“He has run well and put himself in contention to be beaten by two lengths by two of the best horses in the world,” Lees said.

“He gave himself a chance on straightening and in the perfect world he is probably better with his runs spaced but it was certainly worth the exercise backing him up.

“If he pulls up well then I see no reason not to go to the Doomben Cup because it’s a long time between now and the Cox Plate.”

Mugatoo is currently the outright $4.50 favourite for the Doomben Cup, to be held on May 22.

Meanwhile, Think It Over is $11 however trainer Kerry Parker says it’s likely his Group 1 winner will now be spelled instead.

Think It Over had to be scratched from the Doncaster Mile last week after playing up in the float en route to the course but showed he is up to racing at the top level with his Queen Elizabeth Stakes run.

Parker admits the Cox Plate is now on his radar for his stable star.

“You have to nominate him,” he said.

“Off that he has shown he can hold his own against the best horses.

“It’s a shame it was a muddling run and when the gap came he probably just couldn’t get going through it.

“He will probably go to the paddock now. He has been up for a while and we gave him a long preparation heading into The Gong last year.”

Co-trainer Leon Macdonald told The Daily Telegraph before the race that Dalasan would head to the paddock after the Queen Elizabeth Stakes.