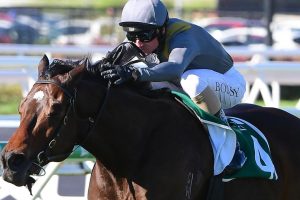 Trainers of horses on the fringe of getting a Stradbroke Handicap start next Saturday were breathing a sigh of relief when Tony Gollan continued his recent golden run by winning the Moreton Cup with Baller.

The winner of the Group 2 Moreton Cup (1200m) at Eagle Farm secures a golden ticket into the $1.5 million Stradbroke.

But Baller, now two from two for Gollan since coming north to the Sunshine State from Chris Waller, won’t be seen in the Stradbroke.

It avoided the potential of the winner of the Moreton cashing in their Stradbroke ticket and pushing those already on the periphery of gaining a Stradbroke start further down the ballot order.

Gollan said Baller, an explosive 2¼-length winner under the riding of Glen Boss, will most likely be seen a fortnight after the Stradbroke in the Group 3 Healy Stakes on Tatt’s Tiara day at Eagle Farm.

Baller’s win continued Gollan’s tremendous success with horses which have previously been with other trainers.

Gollan’s Stradbroke favourite Vega One, the winner of the Group 1 Kingsford-Smith Cup, started his racing life under the care of John Thompson in Sydney.

Gollan has never given any thought to Baller joining Vega One in the Stradbroke.

“He’s not a Stradbroke horse, he is at his best when he is kept fresh and races over 1200(m),” Gollan said.

“The way he has raced at Eagle Farm here today I would suggest something like the Healy Stakes here on Tatt’s day would be perfect.

“He has always been able to gallop, I just tried to keep him fresh for 1200m as I think he likes that and he likes his runs spaced out a little bit.”

Gollan insisted there was no particular key to his success at getting the best out of horses who had previously been trained elsewhere.

“I’m just lucky getting fast horses – if people keep giving them to me I will keep training them,” Gollan laughed.

Baller started $13 in the Moreton but Boss said he wasn’t hard to find as a likely winner of the race if punters looked through his old form.

“I rode this horse as a young horse and he had so much ability but he was thrown in the deep end too many times and just wasn’t ready for it,” Boss said.

“Full credit to Tony, he has given this horse plenty of time and now he is getting back to the ability that he showed as a young horse.

“On top of the ground is the key to him, he won well the other day on a soft track but he’s not a real soft tracker.

“Second-up he was always going to be a better horse and on top of the ground.”

Annabel Neasham sprinter Wisdom Of Water loomed as the winner but ran out of petrol tickets and finished third.

Moreton Cup favourite Splintex ($2.70) was the disappointment, finishing second last and beaten almost 12 lengths, with rider Josh Parr reporting to stewards the sprinter wanted to hang throughout the race.

Mark Newnham said it was always the intention to Splintex after the Moreton Cup.