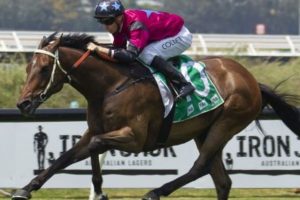 Local trainer Warren Gavenlock has a few good winning chances at Coffs Harbour on Monday and an important barrier trial to watch after the last.

Plonka will trial at 5.45pm on Monday in preparation for the Wild Card at Muswellbrook later this month as he tries to get into the Country Championships Final at Randwick on April 3.

He could only manage a sixth placing in the Northern Rivers Country Championships Qualifier last month but is easily good enough to get into the final.

“He had a bad barrier and the circumstances didn’t help. You can’t win from the 500m,” Gavenlock said.

“I thought we should’ve won it but if we can win the Wild Card, we’ll be right back there at the top of the rankings again.”

And he trials with an important gear change for the first time.

“We’ll trial him in the tongue tie and see if that makes any difference.”

Furphy kicks off the day as Gavenlock’s best hope in the opening race over just 800m.

“He’s done well in a spell and rather than trial him, I thought we’d send him around,” Gavenlock said.

“I’ve pulled the blinkers off him and hopefully we can get out of the boxes.

“I wouldn’t say he couldn’t win. The horse of Sally Taylor’s (Qadira Star) goes well, but it’s an 800m on a wet track and he should be hitting the line from off the speed.”

Just Cosmos is Gavenlock’s other runner in the race but says she’ll be better for another day.

“She just needs to get fit to go into something a bit longer,” he said.

Surmise is one of his more interesting runners in the fifth race over 1200m.

He’s been off the scene since last May but he put in a very nice trial over 800m to get ready for this which suggested he can win a race this time in.

He’s only had four runs for two thirds but his trainer has always thought he was a horse with a bright future.

“This horse is a handy horse,” Gavenlock said.

“He had terrible chips in both knees, which is why he’s spelled for so long.

“To be honest, if he hadn’t broke down and had the chips in his knees, he probably should’ve been contesting the Country Championships.

“He looked really good in his trial. He was nice and fluent and not asked to do a lot. He’ll need the run but it wouldn’t surprise me to see him winning.”

Saintly Sunrise is Gavenlock’s other runner going around Monday in the sixth race over 1400m, which is short of his best trip.

He’s had a six-week freshen up to get the sprint back in his legs after running third at Grafton over 1700m last time.

“The grey was going really good. He just had a couple of hard runs together,” Gavenlock said.

“We gave him an ease up and now we’re back in distance on our home track, so I expect a bold showing.”

Clarry Conners has a great chance in the Canberra Cup on Monday.Source:Getty Images

Clarry Conners was kidding when he quipped that He’s a Given will be the best horse he has ever trained should he win Monday’s Canberra Cup, but technically speaking, it is in fact true.

As it currently stands, Conners has trained four horses that have won 11 races.

They are the father and son duo Tierce and Encounter. Golden Slipper runner-up Decision Time and He’s A Given.

If He’s A Given wins on Monday, he will be the wingingest horse of Conners’ more than 50-year career as a trainer.

He’s A Given already holds one record at Victory Lodge that is unlikely to be equalled with 92 starts – not out.

“He won his first start in a race, so he’s done pretty good and he keeps going,’’ Conners says.

“I think if he gets to a 100 starts, and there is no reason why he’s not going to, I’ll talk to the owners and we might retire him them.

“If that happens, we will find a nice home for him because he is a lovely horse, he is a good type, if somebody wants him to be a show horse or for dressage, he would perfect.’’

There is nothing in He’s A Given demeanour, let alone his form, that has Conners’ planning for the rising ten-year-old’s retirement just yet.

Conners has turned to Jay Ford to ride He’s A Given.Source:Getty Images

Instead, there is an opportunity for not only his 12th win but a career highlight if he can snare some well deserved black-type and a home-town win for his mostly Canberra-based owners.

“If things go his way he is very hard to beat,’’ Conners says.

“He is racing terribly well.’’

Conners has won a Black Opal, via the aforementioned Decision Time in 2010, but the closest he has come to winning the Cup was with 1979 runner-up, Bensynd, a son of Gunsynd.

Conners has trained 38 Group 1 winners so far in an illustrious career, but it is his four Golden Slipper winners that will ensure his place in history.

Conners won’t win a fifth in 2021 but fancies that this year’s juvenile feature could be heading south to Victoria.

‘’Profiteer is my thought,’’ Conners said. “Nothing else excited me.’’