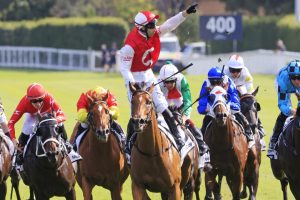 Trainer John O’Shea emerged from four years in the Group 1 wilderness when Lion’s Roar defeated a crack field of three-year-olds at Royal Randwick.

Lion’s Roar came from near last to win the Group 1 $1 million Randwick Guineas (1600m) – a triumphant comeback for O’Shea who has had to rebuild his training career after leaving Godolphin in 2017.

It was a particularly satisfying moment for O’Shea as he had trained Lion’s Roar’s sire, Contributer, to win at Group 1 level while winning jockey Brenton Avdulla wore the Champion Thoroughbred colours of the trainer’s close friend and biggest stable supporter, Jason Abrahams.

From last to first!! Lion's Roar stalks them and roars home to take out the Group 1 Randwick Guineas. A ripping ride from @brentonavdulla for @JohnOSheaRacing! pic.twitter.com/GqLnCXIqZt

And to cap O’Shea’s return to racing’s big leagues, O’Shea’s parents are part-owners of Lion’s Roar.

“I couldn’t sell all of the horse but he was going well in his training so I told Mum and Dad to take a share and now those little owners from Cairns are Group 1 winners, too,’’ O’Shea. “Might be something for the inheritance.’’

Lion’s Roar ($26) came from near last on the turn to power past his rivals and win the Randwick Guineas by 1¼-lengths.

Mo’unga ($5) was a desperately unlucky second and a Group 1 win for first season trainer Annabel Neasham is surely going to happen sooner rather than later, while the only filly in the race, Harmony Rose ($9) was a neck away third.

The previously unbeaten Aegon ($2.60 favourite) was three wide but had cover and failed to attack the line with the same gusto he showed in the Hobartville, finishing only sixth.

“We expected more from him,’’ Aegon’s rider Hugh Bowman said. “Stating the obvious but he didn’t seem as happy today throughout the race.”

Lion’s Roar gave O’Shea his first Group 1 winner since the 2017 Doncaster Mile with Godolphin’s It’s Somewhat. It was his second with Champion Thoroughbreds after Zabrasive’s 2010 Rosehill Guineas.

O’Shea said the Rosehill Guineas (2000m) in two weeks was the next target for Lion’s Roar but he was unsure whether to then aim the three-year-old at the ATC Australian Derby (2400m) or switch back to the Doncaster Mile (1600m).

“He’s been a work in progress with this race and the Rosehill Guineas in mind,’’ O’Shea said.

“I think we are on track, the Rosehill Guineas has always been our target race so to pick up this race along the way is very good.

“But I’m not sure what we will do after that – he’s in the Derby but he’s also in the Doncaster (49kg). Who knows? We will enjoy this win and worry about that later.’’

“I better not explain the way I feel, it’s fantastic, just an unbelievable effort,’’ O’Shea said.

“In the run he was just bolting and then he brings that big action down the outside. It’s just very, very special to win it with Champion [Thoroughbreds].”

Avdulla won his first Group 1 race since his 2019 The Metropolitan success on Come Play With Me and admitted he has been struggling for opportunities in the cutthroat world of Sydney racing.

“It’s been tough, specially when you don’t have the backing of a stable,’’ Avdulla said.

“When you’re turning up to the races on horses you don’t think can win, average sort of horses, it gets pretty flattening and you get pretty disheartened, especially when you’ve been to the pinnacle.

"He's a serious horse!" Hear from @JohnOSheaRacing after an incredible win from Lion's Roar in the Group 1 Randwick Guineas. pic.twitter.com/54QNTVIVbs

“I feel sorry for my missus and my manager, I’ve probably been taking it out on them. So, I can tell you it means a lot because I’ve been working my butt off.’’

Avdulla said it was particularly satisfying to win for O’Shea on Lion’s Roar.

“I’ve been struggling the last month trying to get rides but John has kept supporting me,’’ he said. “John is probably one of the reasons I went to that next level in Sydney.

“I remember him when he was in control of Godolphin, he got me there and next thing I won a premiership. Now that he is on his own he always said he would back me. It’s pretty special to ride a Group 1 winner for him.”