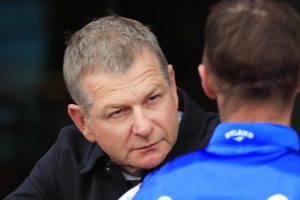 Kris Lees is down to one runner for the Group 3 Newcastle Newmarket but he remain confident that his leading local stable can win its third straight autumn feature on his home track on Friday.

The Lees stable entered Mugatoo and Gem Song but with Mugatoo gaining a spot in the All-Star Mile on Monday, it’s left Gem Song to carry the hopes of the stable.

Newcastle’s mammoth operation had been winless in the feature Handicap until Princess Post took out the race in 2019 then last year Special Reward ensured Lees went back-to-back carrying the same Australian Bloodstock colours.

Gem Song prior to being purchased by his new owners. Photo: Mark Evans/Getty Images.Source:Getty Images

Gem Song will be chasing a three-peat in the ‘royal blue, white horseshoe, black and white checked sleeves and cap’ and his trainer believes the gelding is up to the challenge.

“I can’t fault him,” Lees said. “He came through the first-up run really well.

“If you want to look for a negative it might be second-up off a pretty strong first-up run. He’s had an extremely long break but that has all been factored into his preparations.

“He did a suspensory in the 2019 Golden Eagle, but he’s been back in work for a very long time, longer than was prescribed and he’s done plenty of work.

“He was pretty fit when he went to the races first-up and he’s improved out of that run.

“I’m expecting him to run on Friday. Can he win? He’s capable.”

Meanwhile, Lees said Mugatoo will head to Melbourne at the weekend ahead of Saturday week’s $ million All-Star Mile at The Valley.