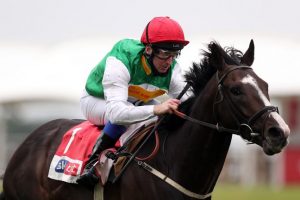 William Muir was left close to tears after revealing King George hope Pyledriver would miss Ascot on Saturday after suffering a groin injury in his box.

Muir reported his Coronation Cup winner to have worked brilliantly on the gallops on Saturday morning, before picking up the issue later that day having returned to the stables.

The four-year-old colt was highly-fancied for Saturday’s Group One after beating Al Aasy at Epsom last month.

Muir told Sky Sports Racing: “He worked on Saturday morning and if I was a gymnast I’d be doing summersaults coming back off the gallops, it was so good. Everything he’d done was perfect. He went home bouncing.

“I came off the gallops thinking if anything gets in front of him, they’ll be the winner. I think he was better than when we went to Epsom. “We went to Newbury [on Saturday afternoon] and that evening my head girl rang me and said Pyledriver is not quite right.

“My vet came out and looked at him and he feels he may have just slipped or stretched and pulled his groin. “Last night I just said: ‘There’s no way he can run’. We need to know exactly what it is so we’re going to do some investigatory work.

“I could cry but we’ve got to be professional and got to do what’s right for the horse. Any horse I’d do the same.”

Muir is yet to fully diagnose the extent of the injury but is confident his stable star can return later this season, with a possible shot at the Prix de l’Arc de Triomphe still on the cards.

“He’ll come back for an Autumn campaign whatever,” Muir said. “At some time we were going to have to give him a break.

“Whether we give him a break now and get him back for the Arc or whether it’s the Breeders Cup or the Japan Cup. Lots of people want us to go places.”