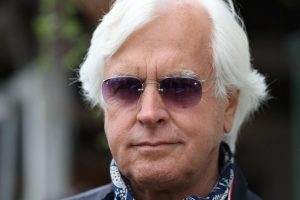 Legendary US trainer Bob Baffert was banned from the Kentucky Derby for two years on Wednesday, hours after confirmation of a positive drugs test against his winning horse Medina Spirit in this year’s race.

A statement from Churchill Downs Inc, which operates the Kentucky Derby, said Baffert would be barred from entering horses at the track until the end of the 2023 Spring Meet.

It means Baffert — one of the most successful trainers in US racing history — will not be allowed to enter the Kentucky Derby until the 2024 season.

Baffert, 68, has been at the centre of a doping scandal after Medina Spirit tested positive for a banned steroid after powering to victory in last month’s Derby.

Medina Spirit’s victory at the Kentucky Derby has been overturned.Source:AFP

It marked the fifth time in the past year that a horse trained by Baffert has failed a doping test.

In its statement announcing Baffert’s suspension, Churchill Downs said the ban was necessary to preserve confidence in the integrity of the sport.

“Reckless practices and substance violations that jeopardise the safety of our equine and human athletes or compromise the integrity of our sport are not acceptable and as a company we must take measures to demonstrate that they will not be tolerated,” said Churchill Downs chief executive Bill Carstanjen.

“Mr Baffert’s record of testing failures threatens public confidence in thoroughbred racing and the reputation of the Kentucky Derby.

“Given these repeated failures over the last year, including the increasingly extraordinary explanations, we firmly believe that asserting our rights to impose these measures is our duty and responsibility.”

Churchill Downs added that it could extend Baffert’s suspension if he was found to have committed any additional violations in any other racing jurisdiction.

Baffert, a seven-time Kentucky Derby winner who guided horses to Triple Crown victories in both 2015 and 2018, initially denied any wrongdoing concerning Medina Spirit after the horse tested positive for the steroid betamethasone last month.

However the trainer later admitted the steroid was contained in an ointment used to treat a skin complaint the horse had been suffering from up until the eve of the Derby.

It’s the 5th time in a year that a Baffert-trained horse failed a drug test.Source:AFP

Earlier Wednesday, Clark Brewster, a lawyer for Medina Spirit’s owner Amr Zedan, confirmed that analysis of a split sample taken from the horse had confirmed the findings of the first test.

Brewster said in a statement that further analysis of Medina Spirit’s sample was ongoing, and would bolster Baffert’s claim that the betamethasone entered the horse’s system through the topical ointment Otomax, and not an injection.

“In response to the inquiries, this will acknowledge that the Medina Spirit split sample confirmed the finding of betamethasone at 25 picograms,” Brewster’s statement said.

“There is other testing that is being conducted, including DNA testing. We expect this additional testing to confirm that the presence of the betamethasone was from the topical ointment, Otomax, and not an injection.

“At the end of the day, we anticipate this case to be about the treatment of Medina Spirit’s skin rash with Otomax. We will have nothing further to say until the additional testing is complete.”

If Medina Spirit’s Derby victory is invalidated, runner-up Mandaloun stands to be named the winner of the May 1 US flat racing classic.

Churchill Downs said Wednesday that the Kentucky Horse Racing Commission (KHRC) was responsible for any decision regarding the disqualification of Medina Spirit.

“It is the understanding of (Churchill Donws) that the KHRC is pursuing the completion of its investigation of this matter in accordance with its rules and regulations,” Churchill Downs said.