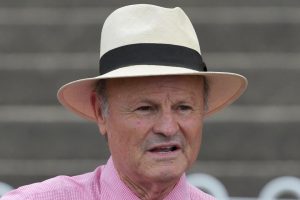 David Payne says his star filly Montefilia is on track for another Group 1 on Saturday when she contests the Rosehill Guineas (2000m).

Payne ran the two-time Group 1 winner first-up over 1400m and she came home well to run sixth behind Forbidden Love in the Group 1 Surround Stakes.

The Rosehill trainer then decided to bypass the Randwick Guineas (1600m) and go straight to a more suitable distance.

Dual Group 1 winner Montefilia is ready for her shot at the Rosehill Guineas on Saturday. Photo; Grant GuySource:The Daily Telegraph

And he said the postponement of last week’s Rosehill meeting wouldn’t affect Montefilia’s chances on Saturday.

“She’s on track and I’m happy with her. It won’t make any difference to her. She’s fit,” Payne said.

“She had a gallop last Saturday because we’ve got the poly track which is excellent.”

Firstly, on the Kensington track at Randwick on Thursday, Payne has two good chances starting off with the lightly-raced Otelo in the opening race for two-year-olds.

He’s become more respected by the punters in each of his three runs to date and was running on for second behind Athelric.

“He’s done very well. Every run has been good and at his last run I think he just got caught on the hop a bit when that horse got away from him,” Payne said.

“He’s definitely improved each time and I think the horse that beat him last start is a decent type of a horse.

“I think he’s peaking because he’s looking beautiful. It’s the best he’s looked and he’s at his top now for sure.”

Otelo, a two-year-old by Irish stallion Shalaa, has only run on a Soft 7 track in the past and although the Kensington surface will dry out in the 24 hours leading up to the opening race, it will still be tough going in the conditions.

Nash Rawiller has stuck with Otelo and should give him the ideal run from barrier six.

“I don’t think the track will worry him. He’s not a big, grouse horse so I don’t think he’ll have a problem with it at all,” Payne said.

“The Kenso doesn’t get that bad. It won’t be as bad as Warwick Farm. It even dries out better than the Randwick course proper.”

Obvious Step is Payne’s other runner going around today in the sixth race, a Benchmark 72 Handicap (1400m).

Keagan Latham will ride the sidestep silly out of the widest gate after winning a 1300m race second-up at Hawkesbury three weeks ago.

Payne knows she has to step up in town now but has got ready to do that now.

“She’s peaking at her third run back,” Payne said.

“She’ drawn 10 out of 10 but I don’t think that will worry her at all. It might suit her taking her time finding a spot.”

The three-year-old has run two very good races at the provincials this time in but punters should also look back to her run in the Listed Reginald Allen Quality in the spring.

“That was a hell of a run when you look back on it so you’d have to think she’ll be competitive in a race like this,” Payne said.

SHELBY READY TO MOTOR AT WAGGA

Danny Williams finally gets his lightly-race four-year-old Shelby Sixtysix to the races on Thursday at Wagga Wagga.

The son of Toronado hasn’t been seen since running third last start in a Highway race and lines up in a Benchmark 66 Handicap (1000m).

“I’ve been frustrated with his preparation because he pulled up with an abscess on his foot after his last run at Randwick, which was an excellent run (third behind Art Cadeau and Water Dove).

“We then we hoping to get him into the Nowra Country Championships Qualifier but he didn’t have enough of a rating.”

Shelby Sixtysix has won twice and ran a second from three runs at this venue and the wet track will make it as testing as it can be over the short trip.

Trainer Danny Williams saddles up the promising Shelby Sixtysix and My Blue Jeans in the final event at Wagga on Thursday. Photo: Mark Evans/AAP ImageSource:AAP

“He’s only had a couple of runs there and the big, roomy track has suited him. He needs racing though because he’s a very grouse horse,” Williams said.

“He’s not a 1000m horse but we needed to get him to the track and put some miles under his legs.

“It will feel longer which is to his advantage. The softer going will assist him.”

My Blue Jeans is in the same race trying to knock him off.

He needs the sun to stay out at Wagga on race day so the track is a chance for an upgrade.

“As long as it’s not too heavy he’ll like it,” Williams said.

“He’s won on heavy tracks but as he’s got older we’ve realised he’s not coping with those heavy tracks anymore.

“He’s far better on soft ground so we’ll have to see what the track is going to be like.”

He goes better second-up also and drops in grade off a Kembla Grange run.

“He’ll be competitive. He’s done very well since his first run on a track that was a little firm for him and they were a little sharp against that class,” Williams said.