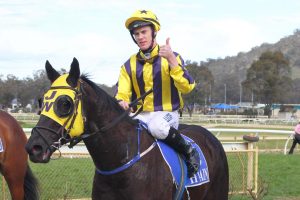 Former top Sydney apprentice John Kissick will return to the big smoke for the first time in more than five years on Saturday – a journey he doubted he’d ever make again.

Back in October 2016 Kissick fractured his T-12 vertebrae riding bulls.

The injuries he suffered sidelined the four-time Southern Districts champion rider for almost four years – he returned to riding in May last year.

“There were heaps of time spent thinking it’s over,” Kissick said.

“For the first two years my body took a long time to even walk around without any pain.

“Even when I got the rods out it took another year or so to come good to even think about hopping back on a horse.

“I just have to manage it. I get regular massages and it’s going really good.”

Saturday will be the first time Kissick, 29, has returned to the city since his last ride at Randwick in 2015.

He will team up with the Donna Scott-trained Bautista in the $500,000 Newhaven Park Country Championships Final (1400m).

Bautista qualified for the rich country series with a second placing in the Southern Districts qualifier at Wagga in February.

“It is a great opportunity, I’ve been lucky to keep the ride and I can’t wait to get back there,” he said.

“It’s awesome to think I’m coming back to Randwick on Saturday after so long away.

“It’s Australian racing headquarters and I had a good time when I was apprenticed in Sydney to Chris Waller.

“Here I was a couple of years ago doubting I’d ever ride again and now I’m coming back to ride in a half-million race at a track I’ve got so many great memories at.

“It’s all a bit surreal to be honest.”

TAB Fixed Odds has listed Bautista as an outsider for the race, pricing the four-year-old gelding at $61 while the Wagga Qualifier winner Another One is a $16 chance.

“He was first-up in the qualifier and got nabbed in the last couple of strides then last time he took on the open class horses in the City Handicap at Albury and he was great.

“He was one of the only horses all day that made ground from the back.

“He’s on the way up, should be peaking on Saturday and the Randwick 1400 metres will suit him.

“He’ll be ready to go and we’ve drawn well so hopefully everything goes to plan.”