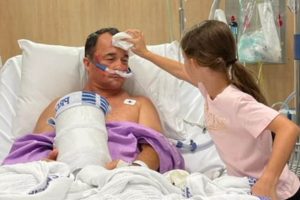 Group 1-winning jockey Jason Taylor feels he has cheated death and says he has been overwhelmed by support from the racing community after being crushed and kicked by a horse in a horror incident.

In his first interview since suffering nine broken ribs, a punctured lung and facial injuries, Taylor has told how he feels lucky to be alive.

The popular Gold Coast jockey, who won the 2011 Stradbroke Handicap on Sincero, was seriously injured in the barriers at the Gold Coast races last Saturday after a horse he was riding stood in the air and flipped on top of him on the ground and then kicked him in the head.

“I feel like I have dodged a bullet,” Taylor told Racenet from his Gold Coast hospital bed.

“I am glad to be alive but I do think things could have gone the other way quite quickly.

“I remember the horse laying on top of me and thrashing and I do remember getting kicked in the head but my next memory was getting needles from the ambos.

“I have got patchy recollections of how it evolved but the barrier staff and the ambos were absolutely marvellous.

Jason Taylor is being well looked after by his daughter Jess. Today is looking positive. Continue to rest up and take care Jas x pic.twitter.com/tjq1to3aL5

“The messages and the support from people in racing has been overwhelming.

“I haven’t been able to answer anyone really, my wife has been there answering all the messages, it’s just been amazing all the wellwishers.”

Taylor’s wife Alana and daughter Jess have been regularly by his hospital bedside and the expectation at one stage was the jockey may have been able to leave hospital on Thursday.

But that has now been put on hold.

“I had been making good progress and but I went downhill last night (Tuesday night) and I was struggling a lot this morning (Wednesday),” Taylor said.

“I have fractured nine ribs and have got a hole in my right lung and the lung has got a little bit of blood and fluids in it.

“The main concern is keeping my lungs moving and making sure I am getting enough oxygen in the right lung.”

Jason Taylor is determined to get back in the saddle. Picture: AAPSource:AAP

Veteran jockey Taylor, who has been on pain blockers and other medication to make him comfortable in hospital, said he has no thoughts of retiring from the riding career he loves.

He is sure he will be back in the saddle, although his first priority is his health.

“I’m keen to get back into it (riding), although obviously my body will take time to repair,” he said. “The injuries were quite significant.”