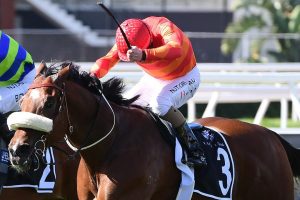 Jim Byrne says he is on track to ride Apache Chase at a featherweight in the Stradbroke Handicap next Saturday with the veteran hoop confirming his weight-loss journey is going as planned, even with “dinner and dessert” on Wednesday night.

The veteran jockey is set to ride the speedy three-year-old at 50.5kg next week with trainer Desleigh Forster confirming she will allow him to ride 1kg over his allotted 49.5kg weight.

Byrne has made a point of taking the weight off “properly” as opposed to wasting away in a sauna in an attempt to keep his strength on the day.

After originally giving himself “a week” to see where he was at following Apache Chase’s victory in the Fred Best Classic on the weekend, Byrne said he knew he would be right to go a few days in.

“It was always a case of getting to know where I am at by the weekend. I am at 52.5kg now and I had dinner and desert last night,” he said.

“It was just finding out if I could do it for Desleigh and the connections first and foremost, then they could chase someone else if I wasn’t able to.

While Byrne admits the “last bit” may have to come off through sweating, he wants to make sure he has the fitness to see out an entire race day at the featherweight with the Stradbroke likely to be one of the last races on the card.

He said he was mindful that he will have a number of other horses to ride on the day.

Apache Chase is currently rated a $13 chance by TAB.

“It is not just about Apache Chase, it is also about other rides I have on the day,” he said.

“I have to make sure I am right for them as well, so I have to do it the right way to ensure I am physically and mentally right.

“I am doing it gradually, very early on in the week I knew I was going to be able to do it because the weight was dropping off pretty easily. I know now my body is releasing it which is great.

“I will probably have to have a bit of a sweat to get the last part of it off but I am in a good place at the moment so I don’t think it is going to be an issue at all.”

It comes as co-trainers Peter and Paul Snowden confirmed Ben Thompson will ride Signore Fox in the Stradbroke next week should he gain a start.

The five-year-old was only a half-length of Vega One in the Group 1 Kingsford-Smith Cup at set weights last week and will get in with 52kg should he make the field.

Signore Fox is currently 35th on the order of entry with the winner of Saturday’s Moreton Cup also given an exemption into the race.