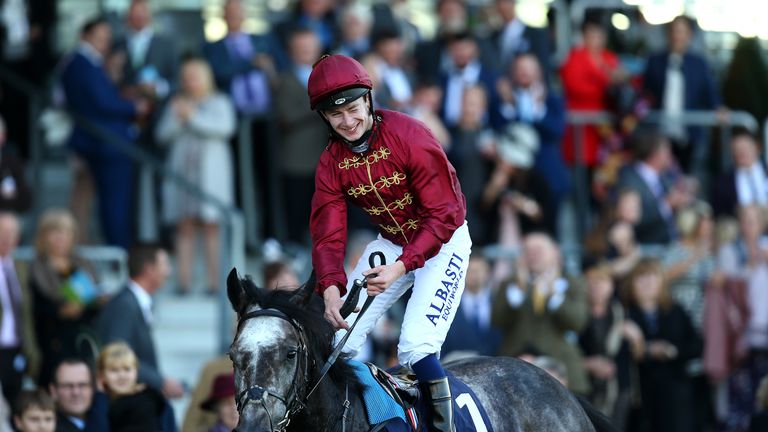 Roaring Lion will head into the $6 million Breeders’ Cup Classic with a lot of strikes against him, according to Hall of Fame jockey and NBC Sports pundit Jerry Bailey, who has “no confidence” he will handle dirt.

Bailey is supremely qualified to assess the challenges facing Europe’s leading three-year-old colt on Saturday, not just as he is a 15-time Breeders’ Cup winner but because he rode the colt’s sire Kitten’s Joy.

Kitten’s Joy, who was trained by Dale Romans, gained a second from two starts on dirt before switching permanently to turf on which he became a leading performer, winning nine times to become US champion turf horse in 2004.

He has been the leading sire of turf horses in the US for the last five years, among his progeny are not only Roaring Lion, but horses like Hawkbill and Oscar Performance, America’s leading candidate in the Breeders’ Cup Mile.

Bailey rode Kitten’s Joy early in his career, partnering him in five races and winning four, including in the Grade One Secretariat Stakes in 2004.

He told www.attheraces.com: “I worked Kitten’s Joy. Dale Romans had me come over to work him on the dirt in his three-year-old year just so they could decide whether they at least try to give him a Kentucky Derby preparation.

“He worked horrible and I came back and told Dale, ‘You’re wasting your time if you are going to try to make a dirt horse out of Kitten’s Joy’. So they didn’t. In that regard I have no confidence that Kitten’s Joy would produce anything that would be effective on the dirt.

“I think Roaring Lion has two siblings. I’ve looked them up, Schiaparelli is one, and Moulin Du Mougin, but I think between them they have only run one dirt race and the horse got beat 13 lengths. That’s not encouraging either.

“I know this is going to come up on the telecast so I have tried to do the fundamental stuff on Roaring Lion and as John Gosden put it, it’s not just can he handle the dirt, it’s can he handle the kickback in his face? That’s another element that is problematic for any turf horse trying the dirt for the first time.”

Qatar Racing’s Roaring Lion has won four Group One races this year, the latest the Queen Elizabeth II Stakes at Ascot and Sheikh Fahad Al Thani wants to try the colt on dirt before he is retired to stud next year.

He is pre-entered in both the Classic and the Longines Breeders’ Cup Turf, to which John Gosden has said he could switch if there was a likelihood of the main track becoming sloppy. A final decision will have to be made on Monday.

“Roaring Lion is a brilliant horse and I totally understand at least the attempt,” said Bailey.

“He is going to stud. If you’ve got nothing to lose, and everybody knows he is brilliant on the grass, then if he can do something on the dirt it would make him that much more valuable. I just think there is a lot of strikes against him.”

Bailey was more confident about Enable’s prospects of putting an end to the sequence of Prix de l’Arc de Triomphe winners who have failed to follow up at the Breeders’ Cup, Golden Horn among them for Gosden and Frankie Dettori.

“There is plenty of Arc horses that ran (down the field) in the Arc that came back and won the Breeders’ Cup. I think it’s only a matter of time (for an Arc winner) and I believe this is probably the time,” he said.

“A lot of that is because horses are put through all their races through the course of the year and the Arc kind of finishes them off.

“It’s a tough race at the end of a long campaign, but Enable was just having her second race and according to Gosden she probably wasn’t even 100 per cent for the Arc. So she can get better and is probably going to be the heaviest favourite and most likely winner on the day.”