Inside running: Samadoubt put on ice

Group 1 winner Samadoubt has been ruled out for the autumn after suffering a tendon injury.

The news comes less than a week after his Bjorn Baker stablemate Champagne Cuddles suffered a career-ending injury at the Magic Millions. 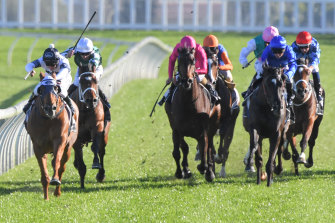 "It's unfortunate Gr. 1 winning Samadoubt has picked up an injury," Baker said on Twitter.

“He has been fit, strong & ultra consistent for 5 seasons & unfortunately like any elite athlete, sometimes injuries happen. He'll head out for an extended break & return when 100%."

Samadoubt had been targeting the $4.5 million All-Star Mile.

Flemington will host the second of four twilight meetings on Saturday, headlined by the listed Kensington Stakes at 5:50pm.

“The twilight event will feature seafood specials and BBQ delights from The Surf & Turf Shack on the Front Lawn; free children’s activities on the west end of the Front Lawn; and VRC members and guests can sip refreshing cocktails while listening to acoustic tunes on The Balcony Bar and enjoy dazzling city views and DJ tunes as the sun sets from The Roof Garden, which will run for extended hours after the last,” the VRC said in a statement.

Gates open at 2pm with the first race at 3:10pm. General admission tickets are $12 for adults, while children under 16 are admitted free to Flemington year round.

The club will host an innovative twilight “rapid racing” meeting on Sunday February 9, with seven races up the Flemington straight which will include a jockeys challenge between country and metropolitan riders.

The Gary Portelli-trained colt has not raced since last year’s Golden Slipper, but brings a record of three wins from six career starts to Melbourne.

"It’s always a worry when a two-year-old comes back and takes on the older horses," Portelli told Racing.com.

"He had a virus so we missed those three-year-old races but from here on, he would be probably taking on the older horses anyway. It will answer a lot of questions."

The Ciaron Maher and David Eustace-trained All Too Royal shapes as the one to beat after his scintillating win in the listed Christmas Stakes on Boxing Day.