Champion jockey Jamie Kah will learn on Wednesday whether she will have to serve an extra suspension on a charge of lying to stewards after the Victorian Racing Tribunal heard from her lawyer Damian Sheales that the case should be thrown out.

Kah, who on Sunday night won Victorian racing’s most prestigious award, the Scobie Breasley Medal, was accused of providing false and misleading evidence to stewards as further details of the COVID-19 lockdown breach by her and fellow riders Celine Gaudray, Ben Melham, Ethan Brown and Mark Zahra emerged from the now infamous Airbnb house party at Mornington last month.

Stewards allege that Kah, by omitting to tell them that Zahra had been at the illegal gathering, had provided false and misleading evidence when questioned. She has pleaded not guilty. 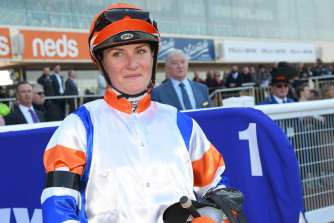 Kah had told stewards that the others had been present, and along with them (and Zahra, whose presence was subsequently admitted) is serving a three-month ban for breaching lockdown regulations.

Her main defence to the charge is that because stewards did not ask her about Zahra specifically, she has not lied to them.

Stewards contend that because Zahra had been present, and she failed to identify him, she was guilty by omission of providing false and misleading evidence.

“The presence of any person was relevant in the subject of the stewards’ questions, the presence of a jockey even more so,” lawyer Raelene Sharp, for the stewards, said, before she disclosed how, in her third interview with stewards on August 30, Kah had explained why she had not mentioned Zahra.

Sharp told the tribunal Kah had said: “Well, look, you never actually asked me if Mark was there and I, from your question, when you said, ‘Who ended up being there?’ I just thought you meant, ‘Who ended up there’, meaning, you know, there was the cops who came, it was late into the night and there were the people that were there. They were the reason why the cops came, why there was the noise complaint.

“If he’d asked me if Mark Zahra had popped in at all or was there during the night, I wouldn’t have had any reason not to tell you that.

Kah’s lawyer Sheales said she could not be guilty because the stewards had not asked her who was there for the course of the entire evening.

“They [the authorities] want to hold Ms Kah responsible for the stewards not asking the right questions.

“The law does not permit that a witness can in any way be held responsible for not answering questions they were not asked,” Sheales added, declaring it was “incompetent at law”.

“Can a charge of false evidence be put because someone did not volunteer something?”

Sharp countered by saying: “We disagree entirely that it is invalid. It’s not a matter of looking at the questions that were asked … the issue for the tribunal is in considering the questions asked and evidence given … that Mr Zahra was also present and the respondent knew that and simply decided not to provide that information when answering a direct question about who was present.

“In our submission the charge should be found proven to the relevant standard.”

Meanwhile, last year’s Melbourne Cup winner, Twilight Payment proved he was in perfect shape to mount a title defence when he ran a slashing second overnight in the Irish St Leger at the Curragh.

The winner, Sonnyboyliston, also has a Cup entry and his trainer, Johnny Murtagh, had said last month when he won the valuable Ebor Handicap that he would like to come to Melbourne to “kick some Aussie butt.”

However, he was more circumspect after the Leger win.

“It would take a fair offer to take him away from the owners now, but the Melbourne Cup is worth €2.5 million [A$8 million]. It mightn’t be for him this year, but he’s only four and could end up down there for us some time yet.”