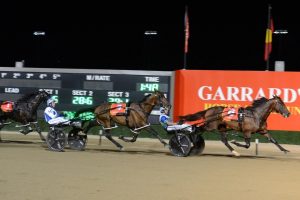 King Of Swing turned the $1-million Garrards Miracle Mile into a procession last night and gave himself a shot at becoming the greatest pacer in the history of the iconic sprint.

The magnificent pacer went back-to-back in the Mile at Menangle Park last night and punters who took the $1.35 were never worried.

The race was over as a contest after driver Luke McCarthy was able to control the tempo and allowed King Of Swing to stroll down his home track straight in 25.8sec.

Brave stablemate Expensive Ego announced his arrival on the Grand Circuit finishing second after racing parked while Wolf Stride did the same racing into third.

King Of Swing became the seventh pacer to win Australia’s richest harness race back-to-back — no pacer has won the race three years in a row.

He is the perfect horse for pacing’s glamour sprint, with blazing gate acceleration, a high cruising speed and faultless manners.

“He is world class and just a pleasure to drive,” said McCarthy, whose wife Belinda trains King Of Swing.

The King is in the castle once more!

King of Swing is your 2021 Miracle Mile champion going back-to-back and making official what everyone expected all week. pic.twitter.com/YEKN1Slowd

With no soreness issues and his love of mile racing on his huge home track, maybe the greatest danger to King Of Swing becoming our first three-time winner of the Mile is the temptation of a stud career, or even a North American campaign.

The one horse he didn’t beat last night was injured arch rival Lochinvar Art, whose trainer-driver, David Moran, received some Group 1 consolation earlier in the night when he captured the $200,000 NSW Derby with Patsbeachstorm.

The Victorian produced the perfect drive to secure the one-one then a cart into the race at the top of the straight. Moran produced the prolonged whip salute after the frustrations Lochinvar Art’s hoof issue that cost him his Mile spot.

Whether he would have beaten King Of Swing, who downed him in the Mile last year, may be a question we have to wait a year to find out.

The other two Group 1s for the older horses had a Kiwi flavour, with Majestic Man leading and jogging home in the $50,000 Trotters Mile, while Mach Shard won the $100,000 pacing free-for-all at just his second Sydney start for new trainer Belinda McCarthy, having been sent to them by Miracle Mile legend Barry Purdon.