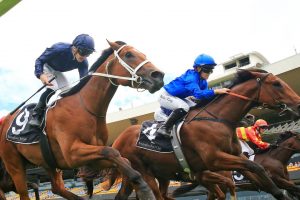 Trainer Chris Waller expects a battle hardened Home Affairs to thrust his name further into the Golden Slipper frame at Rosehill this Saturday.

Home Affairs is set to line up for start two in the $250,000 Group 2 Silver Slipper Stakes (1100m) at Waller’s home track with a start in the richest two-year-old awaiting the colt if he wins.

Waller also has the likes of Magic Millions winner Shaquero ($15) and placegetter She’s All Class ($17) in his Slipper armoury and rates Home Affairs up there with his stable’s best chance for the March 20 feature.

The I Am Invincible colt was narrowly beaten in his only race start in the Group 3 Canonbury Stakes last month after looking the winner at the 150m mark.

Zethus gets the Canonbury Stakes win in the shadow of the post! Massive ride from @RachelK11 for @godolphinpic.twitter.com/bNCueVKwCw

Home Affairs was running on tired legs late and was gunned down by the promising Godolphin colt Zethus in the concluding stages.

Waller believes Home Affairs is capable of turning the tables with fitness on his side when the pair meet again in the Silver Slipper.

“I thought the run was good first-up on a heavy track when we was going to be vulnerable over the last 50m,” Waller said.

“I think he will take plenty from that experience.

“He has taken good fitness out of it and got experience under race conditions.

“He has done everything right since and should be very hard to beat again.”

Home Affairs is on the second line of betting for the Silver Slipper at $4 with the unbeaten James Cummings-trained colt Paulele the $3.80 favourite.

An $875,000 yearling purchase, Home Affairs is one of several high priced yearlings set to stake their Slipper claims with the $1.1 million colt Dio and $700,000 juvenile King Of Sparta also engaged.

Home Affairs is a $26 chance for the Golden Slipper and $15 for the Inglis Sires heading into the weekend.