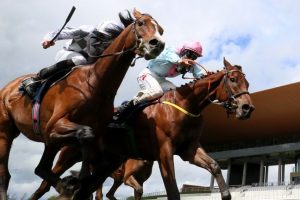 Helvic Dream provided trainer Noel Meade with a first Group One winner on the Flat as he came out on top in a thrilling renewal Tattersalls Gold Cup at the Curragh.

While the multiple champion trainer is no stranger to high-profile success over jumps, his Flat runners at Group One level have been far less frequent since Sweet Mint landed what is now the Diamond Jubilee at Royal Ascot in 1978.

Having finished behind the reopposing 10-11 favourite Broome on his three previous outings this season, Helvic Dream was sent off at 8-1 under Colin Keane – and moved ominously into the slipstream of his old rival halfway up the home straight.

To his credit, Broome refused to go down without a fight and the two flashed by the line almost as one, but the judge confirmed Helvic Dream had won the day by a short head.

The Willie Mullins-trained True Self, who was last seen landing a valuable prize in Saudi Arabia in February, ran a fine race in third in the hands of Hollie Doyle.

Meade said: “I shall die happy now – I was roaring!

“He has an electrifying turn of speed to get there and he lasted out. It was a brilliant ride.

“There’s been plenty of people trying to buy him, but thanks to the lads that kept faith in me as I felt he could win a Group One.”

Reflecting on his previous efforts behind Broome, the trainer said: “We were very disappointed with his first run and then the second day the ground was too quick and Colin minded him. He said we’d beat them if we get soft ground.

“He improved and ran well the last day and Colin was confident enough today going out. I was afraid to even dream about it, to be honest.

“It’s something you dream about.”

He added: “I’ve had a number of horses placed in Guineas, and a fourth in the Epsom Derby, but that is my first Group One.

“They are so easy to train compared to jumpers. I’m always joking with Flat trainers that they are getting away with murder.

“You don’t have to train Flat horses to stay or to jump and there is not nearly as many injuries.

“I’ve always said that Sheikh Mohammed should have sent Willie 200 horses years ago and got him out of the way!

“I was afraid to even dream about it (winning a Group One). I’m thrilled and it means a lot.”