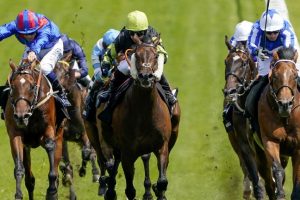 Rank outsider Solent Gateway claimed the narrowest of victories after a thrilling climax to the opening race on Cazoo Derby day Epsom.

Having finished a well-beaten ninth at Chester just a week ago, Tom Dascombe’s charge was a largely unconsidered 28-1 shot for the World Pool At The tote Handicap in the hands of Hayley Turner.

Greatgadian looked likely to prevail after powering to the front inside the final furlong, but both Solent Gateway and King Frankel (5-2) lunged late and flashed by the post almost as one.

Following a brief wait, the judge confirmed the former had won the day by a nose, with Greatgadian half a length away in third.

Dascombe, surprisingly saddling his first ever winner at Epsom, said: “Epsom is the only Flat track I’ve never had a winner at. I took a two-year-old there on Friday (Flaming Rib) and strongly expected that to win and it finished second and I just thought ‘I’m never going to get a winner at Epsom’.

“Derek Passant is a joint-owner is a great fellow and I couldn’t be more happy for him. He is there and I’m not and I feel a bit embarrassed, but I had already committed to go to another owner’s birthday in deepest, darkest Wales.

“Derek wanted to go to Epsom, but I didn’t think he would get in so I took him to Chester last week to try to get a penalty. As it turned out we didn’t need to have done that as this race never filled up and we got in fine. I’m delighted to win a race like this with a maiden.

“Maybe he has just started to grow up and the two runs in a week has helped him.”

He added: “I think he will get further, but we will not worry about that and we will just enjoy today first and foremost. To get a winner on Derby day is pretty special and a huge thrill.

“I’m sure he will now go up a few pounds for that, but we will make another plan at a later date.”