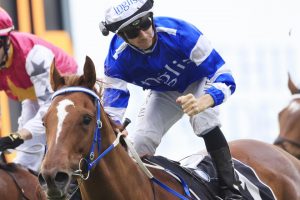 Group 1 star Gytrash is poised for a surprise early comeback and is set to target the Group 1 The Goodwood in his home state next month.

The $1 million Group 1 Doomben 10,000, staged on the same day and worth twice as much, could also be a possibility but The Goodwood at Morphettville is the favoured option for trainer Gordon Richards.

“It really wasn’t on the agenda originally, but he is pretty trim now and doesn’t take a lot of work to come up to the mark,” Richards said.

“The Goodwood being on the 15th (May) is still a little while away and there is enough time for him to get fit enough for it.

“There are no guarantees but I’d be pretty keen to have a crack at it if we could.”

The TAB has inserted Gytrash as a $6 second favourite for The Goodwood and an $8 chance for the Doomben 10,000 in its all-in markets.

Richards insists he will take no risks and won’t rush Gytrash back if he doesn’t continue to impress.

But the stable has been delighted with his recovery from bone chip surgery after last being seen at the races when winning the Yes Yes Yes Stakes at Rosehill last October.

The 2020 Group 1 Lightning Stakes winner was recently caught up in flood drama in NSW with the star galloper spelling at Hawkesbury where his spelling paddock went underwater.

He was then transferred to a water walker facility but that was cut off by floodwater.

As a result he spent extra time working on the water walker, building a fitness base for an unexpected tilt at The Goodwood.

Gytrash will only have a short campaign before being put away for a break and brought back for the spring where last year’s third-placed finisher in The Everest will be set for another tilt at the $15 million race.

But before that the five-year-old will be looking to go one better in The Goodwood than when he finished runner-up behind Trekking last year.

South Australian sprinter Gytrash will be out to continue his giant-killing run in The Everest at Royal Randwick….

South Australian sprinter Gytrash will be out to continue his giant-killing run in The Everest at Royal Randwick.