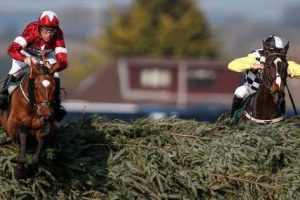 The 2021 Randox Grand National will remain in its original slot, despite calls from bookmakers to stage it when betting shops are back in business.

It has been confirmed that the world famous Aintree marathon, set to feature Tiger Roll's historic hat-trick bid, will be run on April 10.

That date is two days before High Street bookies are allowed to reopen under step two of Prime Minister Boris Johnson’s roadmap to ease coronavirus restrictions on April 12.

Dickon White, who runs the Randox Grand National Festival at Aintree Racecourse as The Jockey Club’s North West Regional Director, said: "This has been a really difficult time for the retail and on-course betting industry and we very much hope that retail outlets will re-open on Monday 12 April, but like so much in this pandemic, this is far from certain at this stage.

"The Prime Minister has been clear that timings for lifting restrictions in England are best case and not guaranteed, while already we know outlets will not be open in Scotland.

"With timings fluid and several downsides of delay as well as some upsides that may or may not happen, there is not a solid enough basis to move one of the biggest racing fixtures in the calendar just six weeks out.

"Therefore, the three-day meeting will remain in its planned Thursday 8th to Saturday 10th April slot."

Grand National heroes including Paul Nicholls, Lucinda Russell had backed the idea to move the race, as it would have helped raise much-needed revenue for the sport.

Aintree's owners The Jockey Club added that a range of stakeholders had been consulted before the decision was made.

“The Randox Grand National is the People’s Race and it is a shame that those wishing to have a flutter this year will be limited to online and mobile platforms, rather than being able to drop into the bookies," White added.

"With the national vaccination programme underway, including using facilities at Aintree Racecourse, we very much hope our way of life can return in the fullest sense just as soon as possible."