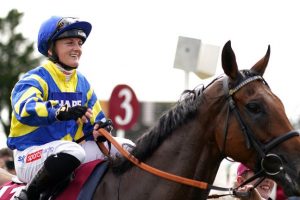 Gemmell is best known as the sole owner of Emma Lavelle’s top-class jumper Paisley Park, who brought the house down at the 2019 Cheltenham Festival when landing the Stayers’ Hurdle.

But he has also been involved with several Flat horses, notably purchasing shares in Ed Dunlop’s Trip To Paris after he won the 2015 Ascot Gold Cup and subsequently travelling to Australia to witness him finishing second in the Caulfield Cup later that year.

Gemmell, who has experienced some of the world’s greatest sporting occasions having travelled the globe to follow England’s cricketers, attended the Australian Open and in racing the Melbourne Cup and Kentucky Derby, admits victory at Goodwood was pretty special.

He said: “I couldn’t believe it – it was brilliant.

“Stradivarius and Spanish Mission coming out ramped up the pressure massively, but it was a wonderful day.

“The Cheltenham Festival and Glorious Goodwood are both great festivals and to win a Goodwood Cup was just fantastic.

“I had a second in the Caulfield Cup with Trip To Paris, but this would be my biggest winner on the Flat.” Gemmell and other members of the Singula Partnership that own the Alan King-trained five-year-old are now looking forward to bidding for further staying honours at either York or Doncaster.

“Onwards to either the Lonsdale Cup or the Doncaster Cup, hopefully,” Gemmell added.

“The ground will be important, of course. I think he can go on good ground, but if there’s any firm in the going then he won’t be running.

“It was great for him to win the other day after missing the Gold Cup at Royal Ascot. The weather just conspired against us, unfortunately – the rain came during the last race on the Thursday, which was no use to us.

“If the Gold Cup had been run on the Friday we’d have been there with a big shout.”

Gemmell also provided an upbeat report on Paisley Park, who finished third when bidding to regain his crown in the Stayers’ Hurdle in March before being pulled up at Aintree.

He said: “Paisley is back [in training] and I’m looking forward to the jumps season as well. I always think with the jumpers, it’s like seeing a lot of your old mates coming back again.

“I think Aintree just came a bit too soon after Cheltenham and the course didn’t really suit him.

“Everything is grand with the horse. We’ll see this season what we do. I would think we’ll head down the same route.”