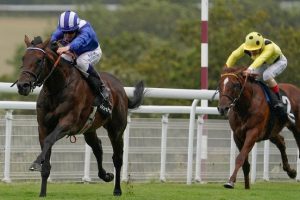 Baaeed continued his seemingly relentless march to the top with another brilliant victory in the Bonhams Thoroughbred Stakes at Goodwood.

The William Haggas-trained colt has made giant strides since making a winning debut at Leicester in early June, following up with a wide-margin novice win at Newmarket before successfully stepping up to Listed class in the Henry Cecil Stakes at the July meeting.

In theory this Group Three contest represented another hike in grade, but the son of Sea The Stars ultimately justified prohibitive odds in devastating style.

Jim Crowley was content to bide his time aboard the 2-5 favourite – and just had to give him a tap down the shoulder early in the straight to encourage him to close the gap on those in front of him.

But he soon came back on the bridle and after ranging alongside El Drama a furlong out, he scooted clear under to prevail by six and a half lengths without being fully extended.