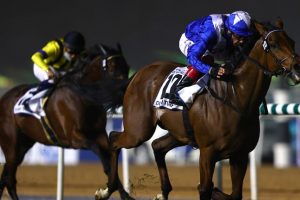 John Gosden’s Lord North produced an irresistible surge down the outside to deliver a famous victory for Frankie Dettori in the Dubai Turf.

Lord North, an impressive winner of the Prince of Wales’s Stakes at Royal Ascot in the summer, struck from well off the pace but was dominant in the final furlong of the Meydan straight.

Dettori, riding ostensibly for the new joint licence holders of Gosden and his son Thady but with the former’s name exclusively on the racecard as trainer in Dubai, was content to sit well behind the lead early on.

Once he asked Lord North to pick up the pacesetters, it was game over – and the 6-4 favourite was three lengths clear at the line, from Japan’s Vin De Garde, with Felix staying on into third for Oisin Murphy and Newmarket trainer Marco Botti.